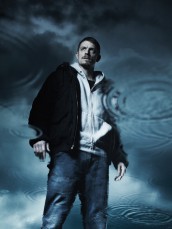 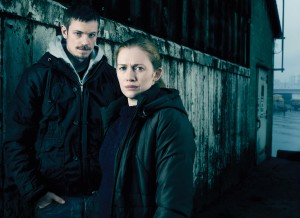 THE KILLING begins its second season tonight, Sunday, on AMC in a two-hour block starting at 8 PM before settling into its regular timeslot at 9 PM next Sunday. Based on the hit Danish series FORBRYDELSEN and developed for American television by Veena Sud. THE KILLING Season 2 follows the homicide investigation of the murder of Seattle-area teenager Rosie Larsen, as well as the crime’s devastating effect on her family. A lot of people were irate that the first season ended without the killer being revealed (perhaps especially because the advertising had so strongly implied the revelation would occur).

However, virtually no one is arguing with the performances, especially those of Mireille Enos as lead detective Sarah Linden and Joel Kinnaman as her partner, Stephen Holder, both of whom are remarkable in their quiet realism. It’s unclear how their partnership will proceed in Season Two, as Season One ended with Linden discovering that Holder had tampered with evidence to make it look as though mayoral candidate Darren Richmond (Billy Campbell) had committed the murder.

Kinnaman was born Charles Joel Nordstrom (he performed his first few acting roles under the name) in Stockholm, Sweden. His mother Bille is Swedish and his father Steve Kinnaman is originally from the U.S., providing Kinnaman with U.S./Swedish dual citizenship. The actor starred in several Swedish film and TV series, including the popular JOHN FALK movies as Frank Wagner. His U.S.-made credits include the remake of THE GIRL WITH THE DRAGON TATTOO, THE DARKEST HOUR, the upcoming SAFE HOUSE, and he’s about to play the title role in the remake of ROBOCOP.

During this interview, Kinnaman has an odd device in his hand that he sometimes brings to his mouth. The object is cylindrical and looks something like a ballpoint pen, with a flat plastic end that is alternately a flat gray or orange. When it does the latter, a scentless pale vapor emerges from Kinnaman’s mouth.

ASSIGNMENT X: I have to ask – what is that?

JOEL KINNAMAN: It’s an electronic cigarette – it’s revolutionary. It’s fantastic, I love it. You bring it to your face, but there’s no carbon monoxide, there’s no tar. It’s vapor.

AX: Were you already familiar with the original FORBRYDELSEN series when you became involved with THE KILLING?

KINNAMAN: Yeah. Well, when I was shooting the pilot, I watched it. And I was also told that my character was completely different from the original. Some of the actors that didn’t want to be too influenced by the original, so they didn’t watch it. I had nothing to fear, so I watched it all in, like, two days. I thought it was very, very compelling. I watched it on my knees, crying with my whole face. I found it really moving, how they showed the grief of the family and how they went through that loss was really moving, and it was such a smart way to keep people invested with the crime investigation. You really feel the repercussions that it has on the family. And it’s funny – I was talking with my parents right after I was cast and I was telling them about this show. “That sounds similar – wait.” Because it was a huge hit in Demark, but it was also a huge hit in Sweden, the Danish version. And there it was called BROTLEF (THE CRIME). And they had watched it like slaves, they had seen every episode. So they were really thrilled that I was going to be in it.

AX: In FORBRYDELSEN, the crime is solved at the end of the first season …

KINNAMAN: Their first season was actually two seasons. [The equivalent number of episodes to the U.S. first season] was their midseason break. It was twenty one-hour episodes, and we have twenty-six forty-five-minute episodes, so the timing is almost exact. And after ten episodes, there was another political figure that killed himself. And we thought the crime was solved, but then in that same episode, [the lead detective] found another huge clue, so we understood, okay, this crime has not been solved yet. So it had sort of the same structure, but ours was a little bit more dramatic. 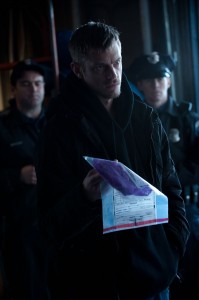 AX: You said your character Holder is was very different from the equivalent character in the original. Did you know, and if so, how far ahead did you know that he was going to tamper with the evidence?

KINNAMAN: I found out when I read it the first time, when we got the script. I was a bit surprised, too.

AX: Did you get the first-seas on scripts as one giant thirteen-episode bunch, or at the normal pace of U.S. TV production?

KINNAMAN: Yeah. And we’re just going to have to find out if Holder’s a good guy or a bad guy, but if you want to find out, you’ve got to tune in [laughs].

AX: Do you feel like it would have helped your first-season performance in any way to know that Holder was going to tamper with the evidence before you got that script, or do you think that Holder surprised himself by doing that?

KINNAMAN: I think that it’s quite characteristic.

AX: What do you feel is the core of Holder, and do you feel that it changes from Season One to Season Two?

KINNAMAN: No, no. What I’ve found most intriguing about playing this character is his flaws. He’s battling his addiction, he’s a fragile person but very intelligent, he’s not very socially equipped, he’s been raised by his sister, who’s just a couple years older than him, he’s never had a father, his mother is just out of the picture. So he doesn’t have that social upbringing that could make him know how to behave in a different situation. So he’s who he is in every situation and that’s what I like the most about him.

AX: Did you have any problems with Holder’s Washington State accent in the beginning? Your normal speaking voice sounds almost American anyway. So was that at all difficult for you, was that something you’d been working on for awhile or did that just come naturally?

KINNAMAN: No, I was working on it. My father’s American, so I have an ear to how it’s supposed to sound, and obviously, Holder doesn’t speak as I do, he’s got his own accent. I think in the first episode and maybe in the second, I have a couple of slips. And usually Americans usually don’t hear it – it’s Swedes that hear it. And they’re really harsh on that – “Yeah, you’re trying to sound American.” But Holder’s accent is kind of a mishmash of the different influences that I have that in my perspective would match his background and upbringing and his social ways in the social ladder.

AX: And did you do any research, either when you got the role, or is anything coming up in Season Two that you had to research?

AX: What did you learn there?

KINNAMAN: Well, there was a point where I was actually feeling like, “Damn, I want to be an alcoholic, too!” [laughs] Because it really is a beautiful place. It’s a place where it’s cool to be vulnerable, and I find that so appealing. And you get wonderful stories – probably not all of them are true, and sometimes I go there with a friend who was a regular at AA [Alcoholics Anonymous], and I’d watch somebody speak, and I’d be moved to tears, and when we would get out of there, he was like, “That guy was full of shit.” [laughs] And of course, when you’ve been there for meetings several times a week for ten years, you sort of understand people are always making up stories, but it’s a place where you can be vulnerable and that’s appreciated. There’s a really strong sense of community and care for each other and I really understand why it works.

AX: Is that comparable in any way to being an actor on a film set, in terms of it being safe to be vulnerable?

KINNAMAN: No. It doesn’t compare. In the sense of being vulnerable, maybe, a little bit, but it’s so much bigger and the stakes are so much higher [at the real-life meetings].

AX: Do you have a favorite scene for yourself from first season?

KINNAMAN: Yeah, I really liked when Holder was at the NA [Narcotics Anonymous] meeting. I really enjoyed that.