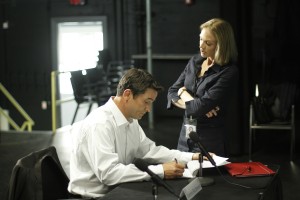 AMC’s new series THE KILLING, airing Sundays, is based on the hit Danish series FORBRYDELSEN, which follows not only the detectives investigating the murder of a young woman, but also the crime’s effect on the community.

Bill Campbell (THE ROCKETEER, THE 4400, ONCE AND AGAIN) plays mayoral candidate Darren Richmond, whose campaign and perhaps personal life are impacted by the situation. Sitting down in a hotel restaurant in Pasadena at the winter Television Critics Association press tour, Campbell talks about his new gig – and about his occasional need to leave Hollywood behind and literally go out to sea.

ASSIGNMENT X: Your character in THE KILLING is a politician, who may be very good or very bad. Have you played this type of character before?

BILL CAMPBELL: No. Well, I mean, to the extent that on THE 4400, the character I was playing [Jordan Collier] was – you never knew if he was good or bad, and he was a leader, then maybe yes. But THE 4400 – it was a lovely show and I really enjoyed it, but it wasn’t as subtle or as realistic about human interaction, character interaction, as this thing is. This is a very real show.

AX: The producers have said none of the cast knows who the killer is, but how much do you know about your character’s secrets that don’t pertain to the murder?

CAMPBELL: Not much at all. Hardly anything, actually. I know I had a wife who died – I don’t know how she died, but I’m fairly sure it was tragic. That’s about it. I know he’s ostensibly an honorable person, he has good intentions, but again, there may be secrets of which, I, the actor am presently unaware.

AX: So is the choice you’re making as an actor that Richmond is always telling the truth he knows it to whoever he’s speaking to in the scene?

CAMPBELL: Yeah. That’s the choice you have to make. None of us know whether we did it or not. So we could be the bad guy. The really great part of it is, it’s a wonderful acting exercise, in that you can’t indicate anything. You have to play it right down the middle. Which is really a gift, in a way. 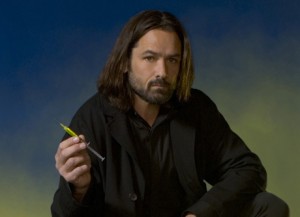 AX: Do you enjoy the wardrobe?

CAMPBELL: I don’t [laughs]. I’m not a suit person. [Regarding his interview attire], this is my own suit, I haven’t worn it in three years, four years or something. I don’t enjoy wearing suits.

AX: So you flash on doing interviews like this when you’re in the suit?

AX: Who are you primarily interacting with amongst the other cast members?

CAMPBELL: I primarily interact with the folks who are my campaign managers, but I do have a fair amount to do with Mireille and as things heat up, I’ll have more to do with the others. Mireille is a phenomenal actress. She’s an amazing actress. You’re going to be seeing a great deal more of Mireille.

AX: It’s been mentioned that you were almost on board a ship as part of the crew, something you’ve done in the past, right when you were cast in THE KILLING. Do you feel the periodic desire to go and do something totally different than show business?

CAMPBELL: I do. I feel it constantly. I felt it urgently at one point, when I woke up one morning and realized that twenty years had gone by since I had arrived in Los Angeles and I was no longer twenty-four but forty-four, and I just – it blew my mind. It’s very funny. The business is conducive to not living the rest of your life, and also, L.A. is conducive to not noticing the seasons passing, and so I just had this scare, and I thought, “You know, if I don’t start leaving town and doing some of the things I’ve always dreamt of doing, because I’m afraid that I’ll miss pilot season or I’ll miss this job or that job, then I will end up another twenty years down the road really regretting everything very much.”

AX: And possibly not even be in optimal shape to do things like being part of a ship’s crew.

AX: Probably easier to act than to be a sailor.

CAMPBELL: Easier physically. In some ways, it’s more difficult to act. It can be really dreadfully boring sometimes [laughs]. I mean, when you’re on the grind of a network show for twenty-two, twenty-four episodes for nine-plus months of the year, twelve-hour days, five days a week, not ever much seeing the sun, it can really take a lot out of you, but it’s a different kind of taxing.

AX: Does anything that you do on ship or feel on ship come in useful when you’re acting?

CAMPBELL: Yes. Being at sea and part of a crew on a sailing ship has helped me to be much, much more comfortable in my own skin and that is an absolute blessing in terms of acting. In fact, I did the pilot [for THE KILLING], then went off to be on a boat, until I found out we’d got picked up. So I was on the ship for five months and then I hopped off the ship to come back to shoot the series. I’ll go back to the ship when we’re done shooting in April for the last two, two-and-a-half months of the voyage. It’s the same ship, same people [that Campbell sailed with before]. They knew that I had the possibility of a show being picked up and so I just left when I had to.

AX: You had a somewhat similar situation with THE 4400, although there you were at sea for fourteen months and then came back to the show. Speaking of THE 4400, were you happy with the way that series ended?

CAMPBELL: I was. We all were sort of wanting to go on with the show and kind of see what happened. So I thought they did as well as they could with the ending, given that the rug was pulled out from under them, but I would love to have seen a final season on THE 4400, for them to really resolve it in some way that was highly satisfactory.

AX: Do you feel like there’s anything that’s come along since that’s had the feel of THE 4400?

CAMPBELL: I don’t know. I can’t answer that, because I really don’t watch TV.

AX: Do you watch yourself in the projects you do?

AX: Is there anything that you feel THE KILLING is comparable to, in terms of its narrative, either other TV shows or films or literature?

CAMPBELL: Again, I really don’t watch anything, so I can’t say in terms of TV. In terms of literature, it feels kind of novelistic, but somewhere between a short story and a novel. Actually, SVU and LAW & ORDER and things like that, they’re more like short stories, and this is more like a novella. I think you’ll find each of the episodes incredibly satisfying, but at the same time, almost every week, your desire to know who it actually is gets ratcheted up another notch. Season One [takes place over the course of] just two weeks. It’s only the first thirteen days after the murder.

AX:And is there sort of a comfort zone working on AMC, knowing it’s likely they’ll keep THE KILLING on the air for the first thirteen episodes’ run, whatever happens?

CAMPBELL: You know, it feels that way to me. I think now that they have such a huge hit with THE WALKING DEAD and huge critical hits with MAD MEN and BREAKING BAD, I think that even if we didn’t do the numbers, they could probably well afford and might very well afford to drag us along and probably be loath to cancel us. There is a certain feeling of safety, I think, but that being said, you never know. Stranger things have happened. There’s no way we won’t see the rest of Season One. I’d stake my life on that.

AX: Is there anything else we should know about THE KILLING or your career overall?

CAMPBELL: I’m very grateful for both THE KILLING and my career.