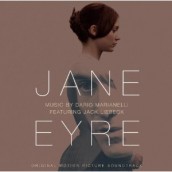 Such composers as Bernard Herrmann, John Williams and Richard Harvey have dared to see what lies hidden in the stone walls of Edward Rochester’s keep in the twenty and counting EYRE adaptations that have been done for film and television over the last ninety or so years.

Now it’s Dario Marianelli’s turn to light the candle and venture through the dauntingly gloomy halls and wind-swept moors in this beautifully done, if somewhat still-life production that takes a more realistic approach to Charlotte Bronte’s now-eternal 1847 story of female oppression and empowerment. With the shining light radiating from Marianelli’s Oscar for ATONEMENT (not to mention a nomination for scoring the adaptation of sister Jane’s PRIDE AND PREJUDICE), this is one musician who knows his way around such romantic haunts- not to mention the incredible talent to give cinema’s literary “respectability” real passion- in this case with a soundtrack that sends chills up the spine, even as the movie itself valiantly tries to achieve them.

Though she’s a woman who endures the trials of Job before coming out on top, Jane Eyre wasn’t written as a women’s libber. Yet she’s no wallflower either as Marianellli fills her with lilting chamber violins and piano, music that’s always yearning for salvation, yet not about to shout it to the heavens. It’s a subtle, beautifully somber approach that certainly doesn’t lack for empathy, especially when a stirring orchestral theme kicks in to play the unspoken, desperate desire that Eyre and Rochester have for each other.

Fans of Marianelli’s consummate V FOR VENDETTA will recognize a similar tone to the stirring, spiritual rebirth he gave to Natalie Portman’s political fugitive in that film. And it certainly works here as well for a caged bird like Jane. Marianelli’s elegant approach also does a nice job of playing the period without resorting to lavish cliché. Yet what just might make this the best JANE EYRE score done to date (and one of the year’s best scores right out of the gate) is how Marianell sees this as the ultimate ghost story, its characters tormented by specters of the past both psychological and palpable. It’s an atmosphere full of haunted voices and anguished, overlapping strings that’s as eerie as it is romantic, once again proving no instrument can extract emotion like the violin (stirringly played here by soloist Jack Liebeck).

Dario Marianelli never fails to astound with his melodic and emotional sumptuousness, with each score like JANE EYRE almost impossibly besting the other. The Bronte sisters couldn’t have found a better man to musically speak for their heroines in the form of an Italian who can so beautifully play England’s agelessly repressed class system and the mental wreckage it reaps.