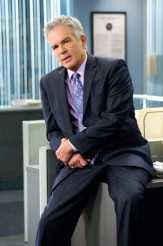 One of the enduring pleasures of the TNT series THE CLOSER was the sparring between Anthony Denison’s character LAPD Detective Lieutenant Andy Flynn and G.W. Bailey’s character Lieutenant Louie Provenza. The characters and their dynamic have now moved over to THE CLOSER’s spin-off MAJOR CRIMES – both series created by James Duff – which airs Mondays at 9 PM on TNT, even though Kyra Sedgwick’s Brenda Leigh Johnson has left and the squad room is now being run by Mary McDonnell’s Sharon Raydor.

Veteran actor Denison, a native of Harlem, New York, got his big break playing mobster Ray Luca on another show with “crime” in the title, Michael Mann’s CRIME STORY, a period drama that ran 1986 through 1988. Since then, Denison has played other sorts of characters, but he’s portrayed plenty of both cops and crooks in projects including WISEGUY, THE LONE GUNMEN, NYPD BLUE, E.R. and PRISON BREAK.

Seated at Flynn’s desk on the MAJOR CRIMES set in Hollywood, Denison talks about playing the same character on two different series, among other topics.

ASSIGNMENT X: Has Andy Flynn changed in going from THE CLOSER TO MAJOR CRIMES?

TONY DENISON: No, he’s still the lieutenant and we have more to do on the new show, which is great. It’s great what we were doing on the old show. G.W. and I had an opportunity to have these comic episodes that we would break off and do. We had those opportunities to do those sort of off-kilter [scenes and episodes]. In this show, we really haven’t had a chance to do that much. But we do still have our repartee with one another, looks, rolled eyes and stuff. We also are doing much more procedural work now with Mary. We’re on crime scenes coming up with stuff to do as detectives would.

AX: Are the MAJOR CRIMES sets mostly the sets used in THE CLOSER?

DENISON: Yes. This is the Police Headquarters in downtown Los Angeles. We used to have the old set and that changed when the buildings changed [in reality] downtown, because we’re supposed to be the LAPD. And this is where the Chief’s office is and the Assistant Chief’s office is in the downtown police offices and it’s great. We were doing a show for five years and all of a sudden, oh, same show, different environment, which is really nice.

AX: Besides, obviously, Kyra Sedgwick, is there anything you’re going to miss from THE CLOSER now that you’re doing MAJOR CRIMES?

DENISON: I would say, “Yes,” but it’s such a qualified yes, because if you see the pilot of MAJOR CRIMES, it’s almost like nothing is changed, but yet it’s so incredibly different that for us on the show, we’re so excited, because we get an opportunity to do something different, and yet we’re the same people.

AX: Does Flynn clash more overtly with Mary McDonnell’s Sharon Raydor than he did with Brenda Leigh Johnson?

DENISON: Well, I don’t want to give away too much. Let’s just say there is friction. If you remember, the first year of THE CLOSER, I was [Brenda’s] mortal enemy. I did not get along with her at all. But they decided to rehabilitate my character and make me be more in the squad and more of a willing astronaut. And they did it in a really clever way, because the whole thing for Flynn’s character is loyalty and thoroughness, so those aspects are very strong in Brenda’s character, so they were able to have those come out in defense of my character, so the minute I saw that she stood up for me, then my whole thing for my character was, “I got your back from now on.”

AX: Would you say the tone on MAJOR CRIMES is lighter or darker than on THE CLOSER?

DENISON: Well, I’d say it’s a darker gray. Obviously, everything is more interesting when they’re shades of gray as opposed to black and white, as you travel to either end of the spectrum. But with MAJOR CRIMES, if you were going to look at that color spectrum, it would be more the darker gray shades. But not black, not white, but just somewhere in between. You get more insight into our characters now on MAJOR CRIMES than you did – I mean, you had your moments in the sun, so to speak, with THE CLOSER, but now you get more moments.

The relationship between Flynn and Provenza stays very strong, but we get an opportunity for Sanchez, [played by] Ray Cruz, and I, who have always had this thing that we decided that we were the two guys who they always go to for fight scenes [laughs] – we’re the guys who are the toughest with the questions. So we developed this thing, which they’ve featured even more now, where no matter what’s going on in the scene, we kind of throw each other a look, like, “Do you believe this guy?” And I’m happy about that, and I think in this episode that we’re doing now, Number Ten, we get in an opportunity to be in a gunfight together.

AX: Did you have to do any special training for that scene?

DENISON: I’ve done so many cops and robbers, so to speak – I don’t take anything for granted, like I’m some firearms expert, but I have a very dear friend, Jim Clemente, he’s a former profiler for the FBI. And he brought me down to Quantico and I took the FATS [FireArms Training Simulator] test, which is where you go in a room and there’s this giant screen and there are these scenarios which go on, and you have this gun, which shoots light impulses, and in the five different scenarios, I scored a ninety-six. It was really exciting. I said, “Can I talk to the screen?” He said, “Yeah, you can do whatever you want. Not that the screen’s going to hear you.” But you go, “All right, drop that gun!” And it helps. It helps defuse your adrenaline. You must be proactive. You just can’t stand there and think, “I’ve got this gun and you’re going to listen to me.” It doesn’t work that way.

AX: Do you and G.W. Bailey ever play pranks on each other off-screen?

DENISON: Me, not so much. I don’t do it as much with G.W., because we just constantly banter and bother one another all the time. There was a funny story. One day, he was late to the set. And a couple of times, I’ve been late to the set, and [the crew] said, “Hey, he’s late to the set, now’s your chance to give him some guff about it.” And I went, “No, no, no. I can’t match wits with him on one-liners.” They said, “You’ll come up with one-liners.” I said, “No. G.W.’s like a Zen master.” So they said, “Well, say something to him.” So he comes in, he’s like ten minutes late and I made some comment about it – I said, “Oh, wow,” I said, “maybe we can get out of here before whenever,” and he goes, “Oh, I’m sorry I’m late.” [laughs] He goes, “There was a dead girl laying in the hallway there, and I was trying to get her phone number for you.” So I turned to the crew and I went, “See?”

AX: You were on CRIME STORY …

AX: Is there any similarity whatsoever between the way CRIME STORY handled crime and the way MAJOR CRIMES handles crime?

DENISON: No, because [CRIME STORY was set in] 1963, it was pre-Miranda, so you didn’t have to read suspects their rights, so there was a tendency for people to be a little bit more in your face, but again, it was an interesting thing. Michael is brilliant in presenting a particular environment and it was wonderful to be a part of that. That was, like I said, my big break. My acting coach, Julie Bovasso, turned me on to Bonnie Timmermann, Bonnie Timmermann turned me on to Michael Mann, and the rest is history. And now I get an opportunity play a quote-good guy, and I’m on the other side of the law. And this is a tremendous – there’s a style to this show [MAJOR CRIMES] that is so subtle. You watch the show and the plots are really great, but it also looks really good, and when you see the pilot of MAJOR CRIMES, which Mike Robin directed – he’s one of the executive producers and one of the main directors – I was watching it the other day for the first time, and I thought I was watching a feature film. I said, “I haven’t had this feeling about watching something since CRIME STORY. CRIME STORY used to look like a feature film.” This pilot episode of MAJOR CRIMES, everybody who was involved was great.

AX: Do you have any other projects going on right now outside of MAJOR CRIMES?

DENISON: Well, I have a movie that I did called TRATTORIA, about a guy who owns a restaurant, a trattoria. So that’s making the festival circuit. And I’m also involved right now in producing some reality shows. I’m getting them off the ground, because I don’t really have a desire to direct, but I do have a desire to produce. So that’s what I’m going to do. Now I have some extra time, a little more visibility again, I’m going to try to take advantage of it.