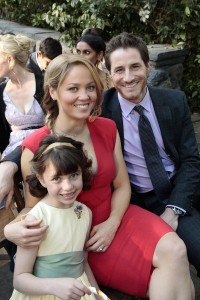 PARENTHOOD began life as a feature film comedy/drama about a large family. It was adapted into a half-hour television series that ran for twelve episodes in 1990-1991. However, the premise seemed so solid that it was revived as an hour-long drama on NBC in 2010. It is now nearing the end of its third season, Tuesdays at 10 PM.

Sam Jaeger plays Joel Graham, who is married to Erika Christensen’s character Julia, youngest daughter of the large Braverman clan. This year, Joel and Julia, who already have a little girl together, have attempted to adopt the baby of a pregnant young woman. This dramatic arc has fallout in Tuesday’s new episode, “My Brother’s Wedding.”

Ohio native Jaeger was a series regular in the well-loved cult musical TV series ELI STONE. He’s also a new author and first-time feature filmmaker, all of which he discusses here.

ASSIGNMENT X: Back when you were playing a lawyer on ELI STONE, you said how happy you were that you were one of the few cast members who didn’t have to sing.

AX: And how is it playing relatively straight on PARENTHOOD, as opposed to the heightened reality of ELI STONE?

JAEGER: It’s a great show. Leaving ELI STONE, I had pretty high expectations for the next show, because it was a show I was very proud to be a part of, and PARENTHOOD is an equally wonderful show.

AX: Were you in it when they shot the original pilot with Maura Tierney, who had to drop out for health reasons and was replaced by Lauren Graham?

JAEGER: Yeah. We had shot the entire pilot, and then we just reshot the scenes that Maura was in with Lauren. And they both did remarkable work.

AX: How would you say your character Joel has evolved over the seasons?

JAEGER: Well, in Season One, there were so many storylines that we were just trying to fit into thirteen episodes. [Now] we can really see the nuances, the relationship between Joel and Julia. Joel [started Season One as] pretty subservient to his wife, and we see a little more conflict in their relationship.

AX: Joel and Julia are parents on the show. Do you have a child in real life?

JAEGER: Yes, I have a stepdaughter and I have a son who’s [going on two years old].

AX: Does being a real parent help you play a parent?

JAEGER: Yeah, I think so. It certainly moves me more when I watch the show, and I think that’s one way that people connect when they watch PARENTHOOD – they don’t feel so alone in their mistakes as parents.

AX: How is it playing part of a large family?

JAEGER: It’s really comforting to me. This is very confusing, but my mom’s sister married my dad’s brother. So everybody’s related. So we had a very large family growing up, so it’s extremely comforting to be a part of that when I go to work.

JAEGER: We’re nearing the tail end. We’re going to see a lot more of Joel and Julia getting closer and closer to this young girl [who is a surrogate mother for them] and getting more invested in her story and the idea of taking this girl’s child becomes more and more difficult for all three of them. 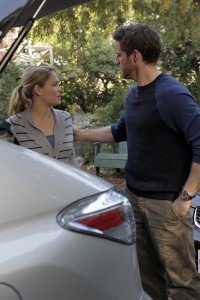 JAEGER: Yeah. I’m finishing up a children’s book that I wrote in my off-time from PARENTHOOD.

AX: There seems to be a theme here – there’s PARENTHOOD, there’s children’s books …

JAEGER: There is, clearly. But yeah, it kind of came thanks to the amount of down time I have on PARENTHOOD.

AX: What is the children’s book?

JAEGER: It’s called SLOW DOWN, MOSES, and it’s basically a little rhyme about reminding this child to take in the world around him. It’s also a reminder for parents reading to their children at the same time to kind of slow down. I also just directed a film called TAKE ME HOME.

AX: Is this your directorial debut?

AX: What’s TAKE ME HOME about and who’s in it?

JAEGER: Me, Victor Garber from ELI STONE, my wife Amber Jaeger is in it, and Lin Shaye. It’s just a wonderful independent film. It’s about a woman who gets into a cab in New York and talks the cab driver into taking her out to California to see her estranged father, and basically chaos ensues as they travel across the continent.

AX: Do you play the cab driver and Amber plays the cab rider?

JAEGER: You got it. [Victor Garber] plays my father. I suckered him into it and he just came and did an amazing job.

AX: Is directing a feature film everything you hoped it would be?

AX: Have you directed anything else?

JAEGER: Short films. I’ve written and produced a short film that Kate Bosworth was in and I’ve been writing for about a decade, so this is the first time that I’ve put writing and directing together. We actually just signed with a distributor. TAKE ME HOME is being distributed by Monterey Media, and we’re going to hopefully get it out in a small theatrical run throughout the country in spring.

AX: Congratulations. Back to PARENTHOOD, how has this season been to work on?

JAEGER: This has been really comfortable. I don’t feel like we have to prove ourselves any more. People know what the show is. If you like it, you like it, and if you love it, you love it. We have a really honest and loyal following. I’m happy to have any show. The fact that it’s a show I love is pretty remarkable.