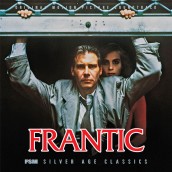 Morricone chases about Paris for Ford and Polanksi

American star Harrison Ford ventured to France in 1987 for Roman Polanski’s fish-out-of-water thriller, as it would’ve been a legal drama of a whole different kind for them to team the other way around. A vital player in uniting their suspense sensibilities of Hollywood and Europe was Ennio Morricone, then riding high with his Oscar-nominated score for THE UNTOUCHABLES. That soundtrack’s edgy jazz sensibility would get an even more sinister, and strenuous work out with Ford as he navigated the mean streets of Paris in search of his kidnapped wife- with Polanski’s own young amour Emanuelle Seigner as his punk-ish companion.

Literally opening with a strong, driving theme, Morricone propels FRANTIC at a moderately dangerous, always-intriguing pace. The composer’s trademarked use of contrasting, orchestral melody has an intrinsic unease to it, a quality that he makes strong, sleek use of here as Ford is propelled about unsavory Gallic types. Yet there’s a determined quality to Morricone’s approach that sums up Ford’s stalwart heroism in the face of overwhelming criminal odds, much in the same way that the Maestro did for Kevin Costner as he faced off against Al Capone’s goons. It’s an UNTOUCHABLES‘ impact that FRANTIC pretty much equals. Morricone brings in a funk beat, a lonely trumpet, sharp electronics, and the dangerous grooves of an electric guitar to make Paris’ underbelly an always-intriguing place to navigate, while ironically reflecting Paris’ tourist-friendly renown with a theme for the French accordion and piano. In the end, FRANTIC is a sleek, subtly intriguing score that speaks the classic, universal language of film noir.

There was often little resemblance between the music on Morricone’s albums and the films’ themselves, especially in the case of FRANTIC, which was radically re-worked on both counts. Bonus points go to Film Score Monthly’s Lukas Kendall for a comprehensive release that not only offers the score as roughly heard to picture, but also the long out-of-print Elektra release (complete with the Simply Red song “Losing You”). Displaying the kind of music detection skills that would have made FRANTIC‘s mystery quite a bit shorter, Kendall’s liner notes show where the notes have been reworked, or not heard at all. Yet it’s a testament to Morricone at how well both presentations flow together, with the Elektra tracks coming off as even more melancholy that the actual score itself, painting a haunting picture of desperation and unease that gives one of the screen’s most assured action stars an intriguing musical, and human vulnerability that brings darkness to the city of light.

Clink on the link to buy FRANTIC soundtrack