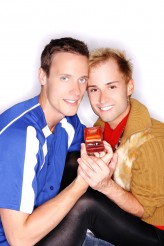 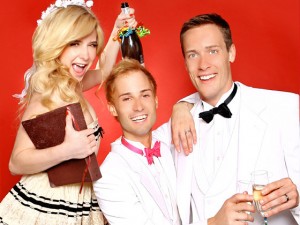 HUSBANDS THE SERIES is the hit Web series created by Jane Espenson and Brad “Cheeks” Bell. Directed by Jeff Greenstein, HUSBANDS stars Bell under his performing name Cheeks as the character Cheeks, an entertainment figure who is married to less free-spirited star baseball player Brady, played by Sean Hemeon.

Now in the middle of its second season, HUSBANDS THE SERIES posts a new episode every other Wednesday, alternating with behind-the-scenes and making-of footage for the three-part show, which can be found online at LoveHusbands.com, with first season and publicity materials still at HusbandsTheSeries.com.

Among the many other doors it has opened, HUSBANDS is the first Web series honored with an event at the Paley Center for Media in Los Angeles. Bell takes time to talk about what’s new this season, including HUSBANDS’ tackling of an issue within the gay community that is seldom dramatized, with co-creator Espenson adding a few thoughts on this topic.

ASSIGNMENT X: To start off with a perhaps superficial question, his is a new look for you. In Season 1, you’re very blond and clean-shaven, and here and in Season 2, you’re dark and have a neatly-trimmed beard. Was there a reason for the change?

BRAD “CHEEKS” BELL: My look is never the same for a very long period of time [laughs], so who knows how many new looks there have been in between Season 1 and Season 2? This is an alternating look, yeah. Maybe it’s a summer look.

AX: When in the life of Season 1 did you and Jane Espenson decide there was going to be a Season 2?

BELL: Well, we wanted a Season 2 all through Season 1, [we were] putting it out there, we just weren’t sure of the mechanics of how to make that happen. So we decided to do a [fundraising campaign on] KickStarter , so that we could just keep moving forward, and our fans really responded and it was incredible, it was so astounding to see the reaction. Within twelve hours, thirty thousand dollars. We get ten thousand over our original goal [of fifty thousand dollars] by the time the campaign was over. So it was amazing.

AX: Were you moved? Were you surprised?

BELL: I was all of those things. I felt like the desire was there for more, but that’s a lot different than having the ability to actually pay money to make it happen, and they did, and they did in very good ways, and it made me feel so much more confident in what we were doing, and it made me so much more excited to be able to give them something, to give them entertainment and laughter. That really means a lot.

AX: Did having the extra money help you do anything different this time?

BELL: Oh, absolutely. We were able to get an incredible location – it’s this gothic mansion with the best view of Los Angeles I’ve ever seen. We were able to just really go all out in every single way. We upgraded the cameras, the wardrobe, everything that we were able to spend money on, we spent it on what was on the screen, so that the fans could really have an incredible experience.

AX: After the first season of HUSBANDS THE SERIES aired, you went to Washington, D.C., to speak at the “Out of the Closet, Onto the Scren” event run by GLAAD, the Gay and Lesbian Alliance Against Defamation. What was that like?

BELL: That was great. They were really great people. I was really astounded with the group of people that they had assembled to talk on the subject of representation of gays and lesbians in the media. Everyone had a different perspective, and I felt like I was at the end of the spectrum, because the other end was Bob Mondello from NPR – he works for NPR and he’s done a whole study about where we [gays and lesbians] started appearing in media and how it progressed, and so it’s mind-blowing to him that there was an audience that was embracing an openly gay couple. So that was like the two ends of the spectrum, and then everyone else in between, and their experience.

AX: Did you and Jane Espenson have any conflicts in direction of scenes or direction of storyline, or did you feel pretty much like you were in sync throughout?

BELL: Yeah, Jane and I are very much in sync and that was part of why we wanted to work together to begin with, because we noticed, as we would talk about things, that so many of our creative tastes and choices were the same. So it’s usually very minor things, something might come up where I say, “I think this,” and she says, “I think that,” and one of us will sort of elaborate on why we think so, and that’s usually all it takes for the other person to say, “Oh, yeah, that’s right, I see that’s the better option.”

AX: Were there things you got to do in Season 2 story-wise and comedy-wise that you didn’t have time to do in Season 1, because you had to use part of Season 1 just to set everything up?

BELL: Yeah. Any pilot, or the start of any story, there’s that exposition. And when you get the exposition out of the way, you establish, “Okay, this is where things are now.” So that when Season 2 starts, in under a minute, we are right into the conflict of what Season 2 is and we’re in the story [laughs].

AX: In the first season of HUSBANDS, there’s a plot point that Brady wants to make the marriage work partly because he’s afraid it will look bad to the non-gay community if it doesn’t. Season 2 is unusual in that it deals – humorously, of course – with the idea of gender stereotypes, that is, preconceived notions that men, gay or straight, are supposed to act like Y and not act like X, and how that is different from sexuality. This doesn’t get addressed much, if at all, elsewhere in either comedy or drama. Was including this as a theme part of Season 2 from the very beginning, or was that how it evolved in the writing?

BELL: That’s something that comes up a lot in my own life and that I have a lot of strong ideas about and seemed like a conversation that isn’t had a lot among the mainstream or in a comedic way or in any other entertainment vehicles, so far as I can see.

JANE ESPENSON: That was always part of it. I think that some people’s reaction to Cheeks is, “Oh, you put another stereotype out there.” And it was sort of this message that’s really important to put out to own the stereotype and don’t be afraid of your authentic self. I think that’s so powerful. So I think we both thought that was very important to get it out there.

AX: Was this an issue that you couldn’t bring up in Season 1 just because there wasn’t time to bring it up?

BELL: Yeah, exactly, [in Season 2], we got more time to talk. You can only fit so much into one thing, but that’s part of what I wanted to say. And I think that it was also in part [due] to a very small percentage of the gay community that reacted that way, the idea that like, “Why do we have to have that guy? He’s a stereotype.” Well, who’s judging who now? [If] you’re not going to watch me long enough to figure out that there’s more too me than my fabulousness, you’re of the exact same mentality as the people you’re worried are going to judge you based on my behavior.

BELL: Right, exactly. “You don’t do it the way I do it, therefore, you’re doing it wrong.” How does that make any sense?

BELL: Every minority is that way. Every minority group thinks that any visible person within their minority is supposed to be representing the way they feel. That’s the beauty of a minority, is that they’re diverse in and of themselves.

AX: Why are there now two different Web sites for Husbands the Series? The original series and various information is still at HusbandstheSeries.com and Season 2 is on LoveHusbands.com.

BELL: LoveHusbands is specifically for Season 2 material. HusbandstheSeries is more all-encompassing stuff, like bios, information, press, but we wanted to give people one spot, where it’s like when you want to see a new episode, and that’s the only thing that’s there, you go to LoveHusbands.

AX: Have you gotten much more visible? Are people coming up to you on the street and going, “You’re on HUSBANDS!”

BELL: Yeah, here and there. It’s really weird. I’ll be at Starbucks and someone will say, “I love HUSBANDS!” or they’ll say, “Cheeks!” and approach me, which weirds me out, because I’m not used to it [laughs].. Someone said, “Are you Brad Bell?” And I said, “Who wants to know?” Like, “What, are you going to serve me papers? What’s going on?” So that’s been an interesting experience. And someone Tweeted the other day that they saw me out, but they didn’t say anything to me, I just saw on my Twitter feed, “I just saw GoCheeksGo [GoCheeksGo isBell’s Twitter handle]!” Which is even weirder, because that’s almost like real quote-unquote celebrity. You don’t actually approach them, but you talk about it, like, “Oh, my God, I just saw So-and-So.” It’s been a crazy experience.

AX: Do you want real celebrity, or would you prefer that people feel comfortable to approach you?

BELL: Well, I want them to feel comfortable to approach me, but I don’t know that I want to be so recognizable that anywhere I go – like the Britney Spears life or the Brad Pitt/Angelina Jolie – I have to leave out the back exit, I don’t want that. There’s a musician called Robin who could probably go a good number of places and stay under the radar, but she can also play a show that sells out the Hollywood Bowl. So I think that’s the ideal, like, yes, celebrity, but I want to be able to get a cup of coffee and look like crap in the morning [laughs].

AX: What would you most like people to know about HUSBANDS Season 2?

BELL: That it is a satirical thrill ride that I personally believe is very unique among the rest of entertainment right now.