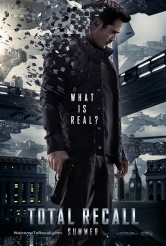 Comic-Con 2012 News: The scoop on the TOTAL RECALL remake and how different it is from the 1990 original

How different is the new TOTAL RECALL remake?

Director Len Wiseman spoke to the press at Comic-Con 2012 about his new film which is also based on the Phillip K. Dick short story “We Can Remember It For You Wholesale”.

“There are things that are definitely drawn from the films as well as the short story,” says Wiseman. “I was intrigued by the way the characters were dealt with in this won. They were familiar characters, but done in a different context.”

Colin Farrell is Quaid this time out, with Kate Beckinsale playing his double-crossing wife and Jessica Biel as his new ally. Still, one of the big changes from the original film is not setting it on Mars.

“The script itself doesn’t go to Mars, that being a departure itself,” says Wiseman. “There were things I wanted to see from the original brought into it. I made a list when I was about to watch the original again about the stuff that stuck with me about that film. Some things were more apparent than others. Other things we did here with a different twist on them. I hope some of the hardcore fans will pick up on some of them.”