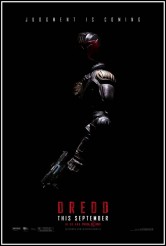 However, Karl Urban who plays the new Dredd, says he wasn’t really worried about being compared to the original – even though he did re-watch it before he suited up.

“[The original] was never a topic of conversation – it was just not relevant because it was so tonally different,” says Urban. “I did rewatch it prior to doing DREDD, but it was more to see what works and what doesn’t. I’m of the opinion if you can learn from your mistakes, it’s the most important thing you can do in life. If you can learn from others, even better.