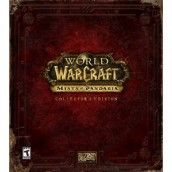 While there’s no doubt that what’s left of my life would be gone if I fully ventured into the WORLD OF WARCRAFT, the scores for these games are certainly a journey well worth taking for listeners who want to submerge themselves into fantasy music environments. Like such mythic cinematic score quests as Howard Shore’s LORD OF THE RINGS, these various extensions of WARCRAFT keep adding to the complexity of what will likely be an eternally expanding tapestry of dungeons and dragons.

Now the landscape goes beyond the “ethnic” qualities of fantastical good and evil characters to encompass a real-world land itself with MISTS OF PANDARIA. even if it’s for a bamboo-hat wearing animal that represents China’s cutest export. Like John Powell’s music that’s accompanied the KUNG FU PANDA films, WAR composing vets Neal Acree, Russell Brower, Edo Guidotti and Blizzard newcomers Sam Cardon and Jeremy Soule are out to give a child-friendly bear some serious musical teeth that confounds those kiddie expectations.

The difference here is that PANDARIA is accented more to the epic WOW canvas. Drawing on a battery of Chinese instruments that immediately conjure the region, PANDARIA incorporates the soaring orchestral approach of our western part of the globe, along with vocal percussion. The result is a sumptuously produced melodic journey that goes way beyond even China’s immense boundaries in musically evoking an age-old Asian dimension of nobility and mystical atmosphere. The accent here is firmly on the latter for cues that are far more about soaring over poetic environments than doing battle, selections that make PANDARIA even more of an all-enveloping listen. “Pandaria” not only marks the evolution of “WoW”‘s music into realms as concerned with meditative beauty as they are spell-casting action, but continue to prove video game music as being evocative as any scores heard for a live-action adventure involving Shaolin Monks. You can find this enthralling 77 minute-long assembly of twenty of PANDARIA‘s most impressive tracks (including a jovial Chinese song) as part of its collector’s edition, or via iTunes to make WOW resistance even more futile.

Click on Link: To Purchase the World of Warcraft: Mists of Pandaria Collector’s Edition soundtrack