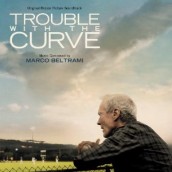 When his own scores are empty chairs, Marco Beltrami arrives to finally give decent music to a Clint Eastwood movie

Though primarily scaring the daylights out of listeners with the likes of the SCREAM series and THE WOMAN IN BLACK, Marco Beltrami can be just as capable of emotional Americana when given the shot. And for a grizzled icon whose last several self-directed pictures have suffered from his own truly horrific scores, it’s welcome indeed to have Beltrami step up to the plate for TROUBLE WITH THE CURVE.

There’s no doubt that Eastwood’s longtime second A.D. Robert Lorenz can be thanked for bringing in a musical pinch hitter for his first time up at directing plate. And Beltrami shines with a solid hit to third base for this baseball-scouting travelogue that starts its trip with bluegrass guitar and bubbling car trip percussion. But most sports movies would be nothing without an Americana orchestra, the kind of noble sound that’s about the pride and history of The Game, especially for a scout at the end of his days. Beltrami is sure to bring the strings up to bat with both the familial warmth of a harp and piano, and the proud Eastwood defiance of a man who isn’t going to go gently into the night.

What’s better is how Beltrami captures the soaring sports sound of such past superstars as Jerry Goldsmith and Randy Newman, getting across that same, soaring finale without resorting to the usual swelling home run clichés. Between TROUBLE WITH THE CURVE and the eccentric humanity of THE SESSIONS, Marco Beltrami has proven that he deserves just as much time up at bat with drama as he does with a butcher knife in composing hand.

Click on Link: Purchase Trouble With The Curve soundtrack