The actress also chats about TRANSFORMERS 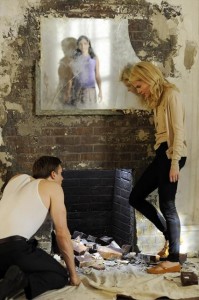 The Drake Building where much of 666 PARK AVENUE takes place looks like a luxury New York address, but don’t be fooled. Ghosts show up and kill people, some residents come back from the dead, while others get eaten by the walls. The building’s owners, Gavin (Terry O’Quinn) and Olivia (Vanessa Williams) Durant, seem to have more power than even wealth and political influence can convey.

And yet innocent, in-love Jane Van Veen, played by Rachael Taylor, and Henry Martin, played by Dave Annable, accept the offer to become the building’s new managers. Dave quickly starts to be taken in by the lifestyle, but Jane grows to realize there’s something very wrong here.

Taylor, originally from Tasmania (a group of islands that are part of Australia), played a helpful government worker in 2007’s TRANSFORMERS. She also had a recurring role as a doctor on GREY’S ANATOMY and was one of the stars of the short-lived CHARLIE’S ANGELS remake, both on ABC, the network of 666 PARK AVENUE, which airs Sunday nights at 10 PM.

ABC has canceled 666 PARK AVENUE, but has said that it will give the show runners enough time to craft a definite conclusion. This interview was conducted before the cancellation was announced.

ASSIGNMENT X: Most of the characters on 666 PARK AVENUE are at least a bit corrupt, but Jane is pretty upstanding. How is it playing the voice of ethics in a show? Does it give you some relief to know that the way you play scenes is not going to come back and bite you later, or do you feel a little disappointed that you can’t get to be devious like the rest of your colleagues?

RACHAEL TAYLOR: I’m really enjoying playing a character that has a strong moral center. To be fair, I kind of relate to Jane. She’s someone who sees the world in a simple yet not naïve way and I like that about her. She’s curious, but she’s going to learn to trust her instincts about the sinister nature of the building. And I do think she’s going to stand up at a certain point and fight for what she believes is right and try to rescue the man she loves from a very Machiavellian sort of world. And I would rather play in the spaces where I’m a good person trying to protect goodness than playing in the space where I’m a bad person trying to protect a bad lifestyle.

AX: Do you think there’s anything analogous between Jane’s situation in the show and your real-life experiences in the industry?

TAYLOR: [laughs] Yes, I do, and I think that the show in general has a bunch of analogies and parallels with this idea of, what are people prepared to do to get what they want, the idea of temptation, the idea of money and greed and ambition. They’re Shakespearean ideas, some of them, but they’re very relevant today. I arrived in Los Angeles at twenty-one. I’m now twenty-seven and I’m still the same person, but I certainly arrived with an innocence and believing that everyone was essentially a good person. And on some level, I still have that belief, but much like Jane, I’ve come to trust my own instincts.

AX: If you walked into a building like the Drake, that was really beautiful and classy but had those bad vibes, would you want to manage it?

Also, one of the things that Vanessa [Williams] mentioned, which is really important to us, is to keep the show grounded and realistic from a character perspective. And I think one of the things that I’m really enjoying is, if you have an instinct that something is a little bit creepy, you will rationally try and resist that as long as you can, because no one wants to really believe that there’s a ghost in their basement. Obviously, you’re going to rationalize and you’re going to tell yourself that you’re just being silly. So I think that’s kind of interesting as well. At one point, I watch my character really start firmly believing that there is something wrong with this building. I’m very intrigued [by] that.

AX: Off-screen, you are clearly Australian. How is it playing Jane with her American accent?

TAYLOR: It certainly becomes part of the character. It’s really important to me to take the responsibility [to do the accent properly]. It’s amazing to be a working actor, to be on television, and I know that, so I don’t want to blow it. So I do sit down with every script and try and do the homework on the American accent, because I know it’s going to be in people’s homes. I’m proud of the work that I’ve done.

AX: In 666 PARK AVENUE, you’re sometimes playing off an unseen evil presence, and in TRANSFORMERS, you were playing opposite robots that the audience could see in the final film because they’d been added by CGI, but you couldn’t see when you were filming, because they weren’t physically there on set. Are those two things all comparable? Is one easier than the other?

TAYLOR: You know, I was so green when I had my experience with the first TRANSFORMERS movie, and it does seem like eons ago, even though it was only five years ago, but it definitely taught me a lot about working on a green screen. On 666 PARK AVENUE, there was a whole bunch of really cool stuff that I had to imagine, and I thought of working on the first TRANSFORMERS movie and how much it actually taught me as an actor before I even knew it. So I’m very grateful for the experience, now that I’m imagining all sorts of creepy stuff every day.

TAYLOR: I do. I have a film coming out I think early next year called THE LOFT, which is a really interesting project. It’s a remain of a Belgian film with James Marsden and Eric Stonestreet; beautiful, sweet Isabel Lucas is in it, Karl Urban is in it. It’s a kind of dark, sexy thriller about four young men who decide to rent a loft in downtown Los Angeles to do whatever they want in, and it takes a very dark turn. But it’s a really interesting character for me. I play a prostitute in the film. She’s very different to Jane. I haven’t seen the film yet, but I had a really amazing time working on it.

AX: Is there anything else you’d like to say 666 PARK AVENUE?

TAYLOR: I think the one thing I would want to articulate about this show is, there’s a mythological compartment going on here. The building means something, everything that Jane discovers, it’s all going to piece together. So I think it will be fun for the audience to piece the puzzle together along with my character.