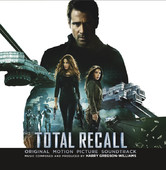 If an old school score fan visited Rekall, it’s likely their fantasy would be to go back to the days when Jerry Goldsmith plied a roaringly thematic score for Arnie’s trip to Mars. But then, you can’t go home again to that kind of unabashedly melodic action sound. And to be fair, this isn’t your generation’s TOTAL RECALL, a time that Hollywood’s effects capabilities, and musical tastes have long since surpassed, for better and worse.

Yet while there’s no surpassing the original film in every category (red cheesiness and all), this revisionist RECALL turns out to be a way more entertaining surprise on all counts than the reviews and box office have given it credit for. And considering its visual overload, it’s doubtful that Goldsmith’s approach would have worked here in any case. So what we of course get is Harry Gregson-Williams blasting out the kind of non-motivic beat-pulse score that’s de rigueur now. But if that’s what a composer’s got to do, then Williams accomplishes the mission with throbbing effectiveness with a sound that’s not so much like be thrown into the future world as it grooving in a particularly dangerous rave.

Like James Newton Howard’s  approach to THE BOURNE LEGACY,  the percussive thrust here is to move things along at a breakneck pace, with an orchestral grounding the deep techno with a solid melodic framework. And when you think about how much electronic percussion there was in Jerry Goldsmith’s score to begin with, Williams’ RECALL isn’t so much a different animal as it is a bizarro evolution of where Jerry might have gone with his own love of tech toys (an affair that would have been a bit more memorably thematic though). For a score and film that are every bit a product of the 22nd century, Harry Gregson-Williams delivers the expected goods in style.

Click on Link: To Purchase the TOTAL RECALL soundtrack