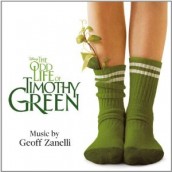 For what could be described as the kinder, gentler Disney version of PET SEMATARY, a couple longing for a child bury their wishes in a box, only to have a magical kid pop out to teach them some invaluable life lessons, as opposed to rampaging through the neighborhood. And there’s certainly no reason to fear otherwise in Geoff Zanelli’s sweetly magical score.

But while heavily adorned with bells, voices, accordions and unstrung guitars, Zanelli’s deft emotional touch makes the music lyrical as opposed to being cloying. Though an orchestra is there for the necessary handkerchief heartstrings, Zanelli’s approach is mostly fun, indie intimate stuff that’s full of promise, a spirit that plays well with a Disney family film vibe. Call this supernatural folk whimsy if you will (with just a touch of darkness and Blue Man group worthy  wackiness), but TIMOTHY ends up being a real charmer, conveying a joyful, bouncy spirit that’s too good to be true, but certainly pleasant to hear while he lasts.

Click on Link: To Purchase The Odd Life of Timothy Green soundtrack