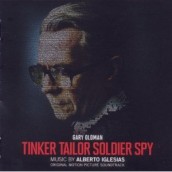 Having dealt with political subterfuge in “Che” and his Oscar-nominated score for “The Constant Gardener,” Spaniard Alberto Iglesias gets to take on Britain’s spy agency of The Circus for the second major adaptation of John Le Carre’s classic novel TINKER TAILOR SOLDIER SPY.

But whether Iglesias was dealing with Latin rhythms or African percussion on his previous ventures into subterfuge, the composer’s work has always been distinguished by how simultaneously cerebral and melodically entrancing it’s been. That talent is taken to a whole new, subtle level here for what might be the calmest, action-less and near-geriatric spy movie of all time- which certainly isn’t a bad thing when you’ve got a film of “Tinker”’s slow-burning intelligence- one that takes about half of its running time to truly catch fire. Much like the unremarkable agents who move about in the shadows, Iglesias’ score keeps its head low with anxious strings, percussion and a lonely piano and violin, all making for a tone poem that conveys George Smiley’s life of espionage as a rather lonely and sad one. It’s an approach that also captures the moody danger of such Michael Small conspiracy scores like “Marathon Man” and “The Parallax View,” seminal 70’s score from “Tinker’’s era.

While Iglesias’ spying is more than a bit noodling at times, it’s also certainly not without interest, particularly when Iglesias employs an electric guitar and a jazz combo to show that Smiley’s got a spring in his step that his adversaries don’t expect, let alone the listener.