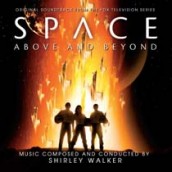 ©2011 La La Land Records
SPACE: ABOVE AND BEYOND soundtrack
Reviews

A year before Johnny Rico screamed, “Kill ‘em all!” towards the bug planet of Klendathu, space marines were shouting their battle cries at Chigg fighters on the deepest galactic skies of the small screen. And just as Basil Poledouris applied symphonic battle fury to that film’s classic score, Shirley Walker showed she had the right, manly militaristic stuff to blast aliens to the tune of a 1996 Emmy scoring nomination for SPACE: ABOVE AND BEYOND. X-FILES.

Producers Glenn Morgan and James Wong followed up that show’s tenuous genre tone with this outright sci-fi series, their first with Walker, who’d go on to far darker ends with the duo for their FINAL DESTINATION franchise and the rat thriller WILLARD, but even by their first pairing for SPACE, Walker was a hardened veteran of macho action scoring, especially on such shows as THE FLASH and BATMAN: THE ANIMATED SERIES.

While Walker gave that same, thrilling orchestral firepower to SPACE over its one season, what’s particularly notable about “Above”’s overall tone is how thoughtfully somber it is. For if TROOPERS was about sending its young recruits into the bloody fun of battle, Walker’s SPACE deals more with the dread, and sacrifice of its fresh-faced fighter pilots being sent to save their planet against a formidable, and mysterious enemy. While Walker uses electronic percussion, and even a rock guitar for good measure, SPACE‘s  centering on dramatic orchestral dread, drum roll sacrifice and noble patriotism makes for music that’d be just as home in “Combat!”’s theater of war as the great BEYOND. SPACE‘s solidly emotional approach is testament to the hard-ass, melodic skill that made Walker the first female composer to break the action scoring barrier.

La La Land collects the best of Walker’s twenty-three episodic scores for SPACE over three CD’s with a presentation that will delight fans of this cult show, let alone admirers of TV music that had the impact a theatrical war in the stars.

Article Source: Assignment X
Article: Review of Space: Above and Beyond soundtrack