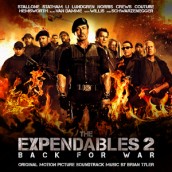 At this point, Brian Tyler has been on target at scoring so many testosterone fiestas that one feels he’d be just as capable of trading in his keyboard for an Uzi. But until Tyler actually becomes a trigger-happy merc, muscle music fans can happily get their freak on for the composer’s return to The Team.

THE EXPENDABLES 2 is all happily what they’d expect, with urgently dire blasts of rhythm and building orchestras, relentlessly climbing towards those big explosions of flame and flying insta-corpses. If the last movie’s problem was that absolute no character was actually expendable, Tyler’s graver, even more suspenseful tone lets us know that bodies are actually going to hit the floor. It’s a growlingly metallic, darker tone that brings throttling threat to the score. With a sweat-dripping orchestra anchoring the rhythmic patter, EXPENDABLES 2 has a militaristic, neo-patriotic sound that gets across a brotherhood of war as opposed to political allegiance, a feel of honor in the midst of the kind of exciting musical carnage that this composer can blast forth without blinking an eye.

It’s an assurance that Sly is certainly happy with at this point in the game- as there’s no composer who’s continued to put an action spring into his step like Brian Tyler, whose frenetic pomp more than ever seems like a series of exhilaratingly destructive tangos for a movie dance that’s way better the second time out.