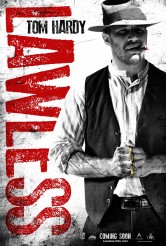 Once upon a time, movies about moonshine-whisky makers were much more common than they are these days. Enter LAWLESS, which has the feel of a slightly tall tale while still being respectably dramatic and action-filled.

We’re in Franklin County,Virginia, a rural place where Prohibition exists as something that is mainly the problem of city folk. The most respected bootleggers in these parts are the Bondurant brothers – nearly silent and evidently unkillable Forrest (Tom Hardy), who has already survived horrendous injuries in WWI, hotheaded middle brother Howard (Jason Clarke) and our narrator Jack (Shia LaBeouf). The two older Bondurants worry that Jack is too soft and sensitive for the family business; Jack is determined to prove them wrong. Several things happen at once. Pretty Maggie (Jessica Chastain) is a refugee from some bad doings in Chicago who manages to unsettle Forrest and Jack decides to court Bertha (Mia Wasikowska), the daughter of a stern, ultra-religious preacher.

Then the law comes calling in the form of Special Deputy Charlie Rakes (Guy Pearce), who hates alcohol entrepreneurs even more than he hates country folk, which is saying something. Rakes is brutal and ruthless, but the Bondurant brothers are resourceful, tough and don’t react well to being told what to do.

LAWLESS is based on THE WETTEST COUNTY IN THE WORLD by Matt Bondurant. The book is a fictionalized account of the doings of some of his forebears. While the movie has its grim and grisly moments, it is quite a few shades lighter than THE PROPOSITION, the previous collaboration between director John Hillcoat and screenplay adapter Nick Cave.

It’s hard to pull off good ol’ boy adventurism these days, because the tone can slip so easily into nostalgia for old movies rather than the actual period being depicted. Hillcoat and Cave avoid that trap via both energy and sincerity – they tell the story as though nothing like it has been told before, with a sense of fascination and peril. In a good way, LAWLESS feels like a ‘70s independent movie, one that’s allowed to have quirks but still wants to adhere to certain traditions and entertainment satisfactions.

LaBeouf is well-cast as the eager-to-prove-himself Jack, and Hardy is suitably both formidable and magnetic as the taciturn Forrest. Clarke doesn’t overdo Howard’s angry streak, playing him as a man who plausibly gets along with the neighbors but is capable of brutality. Gary Oldman is enjoyable as a major-league gangster who figures into the proceedings. Chastain is gorgeous and period-appropriate, and Wasikowska finds humor in her mischievous yet devout character.

It’s a little hard to say what’s going on with Pearce as Rakes. The character is written as a man whose ego and snobbishness, along with utter lack of empathy, inform all that he does. However, since we don’t know how he got that way or why he takes the Bondurants so personally, the character comes to seem over the top and Pearce goes with him. Granted, we are seeing this from the point of view of people who despise Rakes, and a larger-than-life villain often comes with this kind of territory, but it still seems just a touch too much.

Overall, LAWLESS is good. It looks and feels right, and a balance of grit and fun that makes us appreciate the filmic tradition being celebrated here, as well as LAWLESS itself.