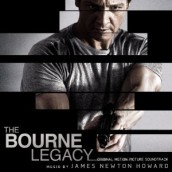 James Newton Howard takes the baton from John Powell to run a more straightforward, beat-driven marathon. In much the same way that new writer-director Tony Gilroy has thankfully wiped out Paul Greengrass’ crazy-cam movement, Howard’s keeps the ethnic, thematic rhythms of Powell’s three previous scores to a minimum to make his LEGACY to BOURNE‘s seminal action sound a combo between that composer’s lean, mean fighting machine and his own breathless, powerhouse suspense for another guy on the run he scored called THE FUGITIVE.

That Oscar nominated touch is a bit more hipped up here, and with significantly less orchestra, which only increases the symphony’s impact when strings crash the sample-heavy party. You can also hear the kind of ice-cold horror of Howard’s work for the immense guilty pleasure of DREAMCATCHER, whose DNA abets a super solider born in a CIA laboratory. Yet there’s also a bit of empathy that reveals this operative as having a moral compass when he isn’t wantonly slaughtering hapless security guards who get in the way. LEGACY‘s breathlessly grinding samples and shredding guitar chords toe-tappingly suggest this agent’s drug-enhanced abilities, and desperately need to get his next fix.

Thankfully, Howard also knows when to give the music invisible, a la his beyond-subtle approach for Gilroy’s MICHAEL CLAYTON (which also netted an Oscar nom). Where it’s difficult to hear much of this rhythmic stuff above the movie’s gunfire and roaring motorcycles, BOURNE‘s music definitely cuts through far more impressively as a solo soundtrack. Smart enough not to deviate too much from Powell’s seminal action sound while declaring its own identity (right down to replaying Moby’s “Extreme Ways” for the end title with even more orchestral oomph), Howard does a capable job in a relay. Here’s hoping the addition of the real Damon deal next time out opens up new alleyways for Howard to parkour about.

Click on Link: To Purchase The Bourne Legacy soundtrack