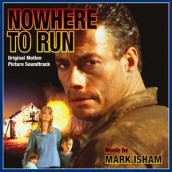 The Muscles gets his best music

Jean-Claude Van Damme would get one of his best starring roles in this successful, if now relatively unsung 1993 film that sees his ex-con step into Shane-like shoes (via motorcycle), taking on the evil mining barons out to murderously toss out attractive homesteader Rosanna Arquette and her kids. RUN‘s impressively subdued and intelligent handling can be squarely credited to director Robert Harmon, who wisely reteamed here with his HITCHER composer Mark Isham.

Where the composer had handled that picture’s visceral atmosphere with ethereal, electronic tones, NOWHERE TO RUN saw Isham significantly beef up his approach with the weight of a full orchestra, one capable of unleashing waves of percussive fury upon the bad guys (even if RUN has an almost shockingly low body count). But like THE HITCHER, atmosphere is the key to Isham’s mostly understated approach, beginning with the tentative strings and tender bells of Van Damme becoming a father figure. With the family’s waves of grain, Isham’s music also takes on a soothing Americana quality, with the story’s western aspects captured by a guitar. But ultimately, action’s the thing here, with Isham unleashing brassily punishing hits, a victorious symphonic pounding that he’d next take to far more punishing heights for Van Damme’s other great vehicle TIME COP.

Leave it to Perseverance, a label who’s shown much love to the muscles from Brussels with their releases of KICKBOXER, NO RETREAT NO SURRENDER and DEATH WARRANT to give what’s arguably the action star’s best score the full treatment, including alternates and appreciative liner notes by Gergely Hubai that offers new observations from Harmon and Isham.

Click on Link: To Purchase the NOWHERE TO RUN soundtrack