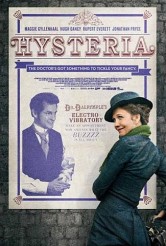 A charming comedy set in the Victorian era, that manages to get across some serious history in a mostly lighthearted fashion

Dr. Mortimer Granville (Hugh Dancy), a young physician trying to cure the sick in 1880 London, has a problem with hospital hygiene. That is, the hospital where Granville has been working doesn’t believe in hygiene, and when he tries to press the issue, his supervisor fires him, which is indeed a problem for our penniless hero. However, Granville eventually finds employment with the eminent Dr. Robert Dalyrimple (Jonathan Pryce), who is making a not-so-small fortune by treating “hysteria” in his wealthy female patients. Hysteria was the popular diagnosis at the time for any number of emotional conditions in women, ranging from severe grief to lustfulness (something well-bred women weren’t supposed to experience) to pretty much being anything but utterly docile and demure. While we learn later in the film about some barbaric treatments inflicted on women in the name of their own good (and, more importantly, preserving the social order), Dr. Dalyrimple has a benign if unexpected method of treating hysteria, which fits securely within his own sense of propriety and is satisfactory to the patients.

When Dalyrimple adds Granville to the practice to lend a hand, business booms. Granville falls for Emily (Felicity Jones), Dalyrimple’s Victorian ideal of a daughter, a relationship that has Dalyrimple’s blessing. What could go wrong here? Well, for one thing, there’s Dalyrimple’s other daughter, Charlotte (Maggie Gyllenhaal), who insists of providing needed medical services to the poor. Dalyrimple threatens to cut Charlotte off entirely if she doesn’t return home, but the threat doesn’t phase her. Meanwhile, the practice has gotten so popular that poor Granville can’t keep up. However, he has a moment of inspiration …

There are a number of ways director Tamara Wexler could handle the material. She maintains a genteel and gentle drollness throughout, which sometimes makes the jokes funnier and sometimes doesn’t push them enough, but always respects both the characters and the tone. When we get to the film’s eventual indictment of the era’s hypocrisy and brutality, it comes naturally and has been earned by the steady good humor preceding it.

Dancy does a fine job playing a young man of rectitude who has his resolved challenged on a number of fronts. Gyllenhaal is properly spirited and charming, Jones makes Emily interesting and her own person and Pryce is perfect as the doctor who supposes that playing by the rules will be rewarded. Rupert Everett, as Granville’s friend and benefactor, gives his character just the right sort of debonair eccentricity.

HYSTERIA is actually quite well-mannered, especially given its title. It is also appealing, deft and has a truly memorable closing credits sequence.