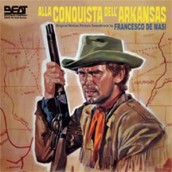 When Americans hear “Spaghetti Western,” Ennio Morricone stands as the lone gunslinger. But thanks to Italy’s Beat Records label, other practitioners of this mythic, self-referential craft are getting their time in the sagebrush spotlight, especially Francesco De Masi. While his one English-language modern martial arts oater would be LONE WOLF McQUAID, De Masi was as prolific as Morricone on their home turf with the likes of ARIZONA COLT, ANY GUN CAN PLAY and RINGO, THE LONE RIDER.

Beat now unleashes a De Masi fusillade in the genre (far from the only one practiced), two bullets of which include MASSACRE AT MARBLE CITY and LONE AND ANGRY MAN (or respectively ALLA CONQUISTA DELL’ARKANSAS  and UNA BARA PER LO SCERIFFO). While Morricone, De Masi and their many compatriots watered their horses at the same musical trough, each composer set their pasta apart. In De Masi’s case, it’s with sturdy, Hollywood-style orchestrations that are more conventional, and no less thrilling for it (or “more Tiomkin than Morricone” as the composer’s son Fillipo sums it in his appreciative liner notes).

ARKANSAS‘ bold symphonic action quickly defines no-nonsense heroism with a throttling theme and angry percussion, along with such effective musical conventions as a wearily played harmonica, an Indian drumbeat and a jaunty choral melody that trumpets its avenging gunslinger angel to the heavens. De Masi is completely reverential in terms of musical good and evil, no more so than with an ANGRY MAN, whose fate is to die with gun in hand. He gets it with a throatily memorable title song by Peter Tavis, once again accompanied by a swooning chorus. De Masi clops along with harmonica in mouth, a handily strumming guitar, baleful horn and even some subtle rock nuances, his vengefully swirling orchestral theme nicely bringing to mind Elmer Bernstein and John Barry.

Both De Masi scores are terrifically fun, if not outright revelations for those who didn’t know he rode the range. Thanks to Beat for showing us there was another Spaghetti sheriff in soundtrack town.