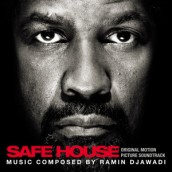 SAFE HOUSE is risk-free in more ways than one as it follows most of the same story beats of a CIA dude movie on the run, a genre that was made so popular by the BOURNE IDENTITY franchise. Yet that doesn’t mean this espionage suspenser is lacking for propulsive danger, especially given a tensely effective score by Ramin Djawadi. Though set in South Africa, the German / Iranian composer avoids an ethnic sound and gets straight to the heart of the rhtymic action, with a driving, rock-accented talent he’s already impressively displayed in two MEDAL OF HONOR videogames.

Here Djawadi literally drives fuel to the fire for a lot of the action, with an orchestra providing a strong backdrop. But what truly distinguishes SAFE HOUSE from similarly themed action pictures, and scores is that its hero certainly isn’t Jason Bourne, even if his sucessful heroics seem just as superhuman. For running in pursuit of a crafty Denzel Washington is a heavily panting Ryan Reynolds, a very mortal field operative who gets more than he wishes for when he asks to get out from behind the desk.

His desperation, and steady grasp of just how dehumanizing it is to be in The Agency gives an emotionally potent lull to SAFE HOUSE‘s rhythmic stuff, making the actors’ firecracker mind games perhaps even more interesting than all the running about. While Djawadi and the audience are familiar with the path both men will inevitably take for SAFE HOUSE, its musically dangerous, and surprisingly introspective quality make this album worth a comfortably provocative stay.