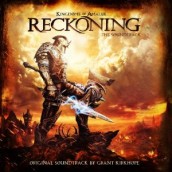 An undead knight is out for Kratos-level payback in this fantasy RPG, and it’s up to Grant Kirkhope to go Medieval with a far more mature bit of musical creature-trouncing than he’d dealt with in such previous child-friendly games as GRABBED BY THE GHOULIES and BANJO KAZOOIE.

Thankfully for Kirkhope’s sake, KINGDOM‘s warrior will have everything on his lethal list of grievances except for this score, as Kirkhope does RECKONING‘s wrath proud with an exhilarating soundtrack that plays like equal parts LORD OF THE RINGS and STAR WARS – minus much of the dirge-like bits that go along with a grim quest. It’s an E-rated vibe for an M-game in the best way, going for a thematically grand sense of wonder and excitement.

Performed with bold power by the City of Prague Philharmonic Orchestra, Kirkhope’s music dexterously ranges from vocal enchantment to imposing brass payback. But it’s during the cliffhanging thrills and spills that RECKONING really soars, music that conjures a battle with TIE Fighters far more than it does dealing vengeance to some blood-crazed ogre. If anything, Grant Kirkhope scores these KINGDOMS like the music a twelve year-old hears in his head while playing Dungeons and Dragons- a sound that’s fantasy-analogue in its winning attitude.