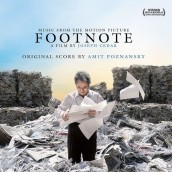 Who’d have thought that the seemingly boring process of Talmudic translation would result in pokey pizzicato music that makes you think you’re listening to the score of the latest dumb multiplex pratfall fest, as mixed with the zanier stylings from THE WITCHES OF EASTWICK. However, what you’re actually experiencing is the ever-maddening Tom and Jerry sound of a cat and mouse battle between hyper-intellectual father and son, the smarts behind this seemingly goofball soundtrack brilliantly captured by Israeli composer Amit Poznansky.

Where so many ultra-serious pictures from the Holy Land are as dramatically dry as its sands, FOOTNOTE turns out to be as wittily entertaining as any Coen Brothers comedy, especially as propelled by writer-director Joseph Cedar’s inventive use of visual bookmarks. These arch character revelations are also they key to Poznansky’s purposefully overblown screwball approach. He brings on an ever-escalating series of orchestral snooping, sad-sack brass statements, scratching violins and gleeful harp glissandos- goofball stuff as the height of irony when applied to steel-trap minds spinning out of control with Talmudic facts. It’s also a playful approach that works exceptionally well at conveying the razor-sharp thought process of a nearly mute, grumpy old academic’s seeming moment of triumph. Yet it’s anything but as FOOTNOTE‘s scholarly subterfuge and battle of factoids turns Poznansky’s music into a madcap Viennese circus waltz as conducted by an insane Igor Stravinsky, his frenzied instruments’ inability to stop thinking causing them to collapse into one cream pie after the other.

Probably the wackiest score ever written for smart people who are astoundingly dumb when it comes to real life, Poznansky’s score could make him the next big thing for an Adam Sandler movie, if he’d want to go the tote in Hollywood.