Will there be a GREEN HORNET 2? 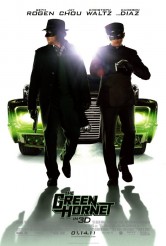 Will there be a GREEN HORNET 2?

While promoting his new superhero comedy THE GREEN HORNET today at the Sony Pictures lot in Culver City, CA, star and co-writer Seth Rogen admits that he and fellow writer Evan Goldberg weren’t thinking beyond the first movie while making this revisionist super hero tale.

“We’re not the kind of writers to save ideas,” says Rogen with his trademark laugh who plays the titular character – a hero who poses as a villain to take a bite out of Los Angeles crime with his dutiful (and more than able sidekick) Kato (Jay Chou). “If it’s remotely good we shoved it in there and nor are we confident enough that there will be a sequel. Anything that’s good we put in there.”