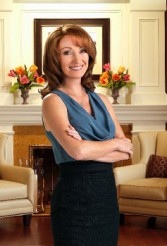 The DR. QUINN stars talk about their onscreen reunion and Flynn dishes working with her real-life mother in the new Hallmark film PERFECTLY PRUDENCE

For six seasons, from 1993 through 1998, Jane Seymour as Dr. Michaela “Mike” Quinn and Joe Lando as her stalwart love Byron Sully thrilled television audiences with their chemistry. Although the two actors have remained friends in real life, they haven’t been paired again on screen – until tonight at 9 PM EST, when the Hallmark Channel reunites Seymour and Lando in the original romantic comedy PERFECTLY PRUDENCE.

As an added bonus, Seymour’s real-life daughter Katherine “Katie” Flynn also stars in the telefilm. PERFECTLY PRUDENCE is a sequel of sorts to Hallmark’s 2008 DEAR PRUDENCE, which starred Seymour, but not Lando or Flynn – and which was in fact a different genre, as Seymour, Lando and Flynn explain at a party thrown last night by Hallmark for the Television Critics Association.

JANE SEYMOUR: What happened is, Hallmark loved DEAR PRUDENCE, so they ordered another one right away, and then they decided they didn’t want to do mysteries any more. So they abandoned the script that was written, and so the writer, Rob Gilmer, said, “Well, what are you doing?” and they said, “Romantic comedies,” and he said, “Well, that’s perfect.” So they came up with this script.

AX: Was Joe Lando your suggestion to play opposite you?

SEYMOUR: No. [Gilmer] had met Joe Lando socially at my home, and he had obviously seen us do DR. QUINN, and he also met my daughter, Katie Flynn, and knew her and our dynamic and wrote it for Katie and Joe. 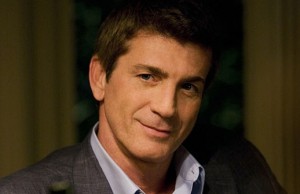 JOE LANDO: I think, yeah. When DR. QUINN was initially canceled, we were both shocked and upset. We thought it had another year, but then there weren’t a lot of projects out there. We’ve looked for a long time and PRUDENCE was the perfect way for us to get into it again. The writer has been at Jane’s house a few times and observed us together with Katie – Jane’s daughter Katie is also in it, Katie Flynn – and saw that we had this rapport and basically kind of wrote this story revolving around what he saw going on with us personally.

AX: Presumably, they add a little more romance than is in your real friendship, because in real life, she’s married to James Keach …

LANDO: Yeah, he plays my boss in the movie. He’s an actor and he came out and had a few days with us, so it was like staying at home and shooting the movie. This is kind of a big deal for us [Lando and Seymour]. It’s been over twelve years [since the last professional collaboration].

LANDO: I play a man named Jack who works for James Keach. My job is to come in and break down the show [that Seymour’s Prudence works on] and make it more productive and take advantage of more of the ancillary things like product placement and stuff that Jane’s character Prudence is totally against. And then you find out that my character and her have a past. I walked out on her twenty-five years ago.

AX: Shame on you.

LANDO: Yeah. So she’s not very happy to see me again. 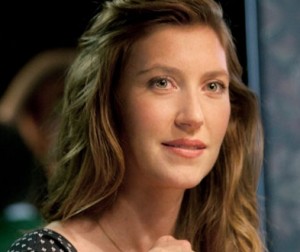 KATHERINE FLYNN: My character [Prudence’s daughter Annie] is trying to be a producer and figure out her way professionally and I think in this film, it’s not only about figuring out what you want romantically, but I think it’s a lot of figuring out who she is in the creative work environment.

AX: How is it working with your mother?

FLYNN: Oh, it was a blast. We ran lines every night, we had dinner really late. It was an experience.

AX: Had you worked with her before?

FLYNN: My writing partner Crystal Angel and I wrote a Web series called QUITTERS that my mom was in with us. She played my mother in that and it was very fun.

AX: Do you consider yourself primarily an actress or primarily a writer, or are you a complete hyphenate?

FLYNN: I would say that I’m probably more an actress than I am a writer, but I love writing and I’ve been writing a lot recently. But a lot of the stuff I write is for me. I love both very much.

AX: DEAR PRUDENCE was a mystery.  Is there any kind of a murder mystery component to PERFECTLY PRUDENCE?

LANDO: Not at all, no. Hallmark wanted to get away from that and they did it with this. This is funny, it’s got the romantic interest and I think it’s got a lot of heart, too. It’s a good story about people, love and hate and forgiveness.

SEYMOUR: It’s very complicated. There’s a guy who’s in love with [Flynn’s character] and a guy who is a bad guy, basically, who she spends time with, and there’s a secret at the end.

AX: Are you also involved in PERFECTLY PRUDENCE?

AX: How do you divide up your time these days between producing, acting, designing jewelry, writing? Do you consciously sit down and go, “I’m going to devote this much time to X?”

SEYMOUR: Yes. I work out of my home, I have a studio there, so every single day, after I get the kids off to school, I’m either painting or designing. And if I’m acting, I go off to make a movie, and believe it or not, I take my paints and my designing with me. And then I have someone who works with me and runs my whole design business, so I just send her stuff and she deals with the business end. I don’t deal with any of that. I just do the designing and the acting and producing I do with my husband, James.

LANDO: Actually, I’ve gotten used to working very quickly. I’ve spent most of my career in television and these days, with digital cameras and technology, we’re able to shoot at a faster pace. We had a twelve- or fourteen-day schedule and twelve-hour days. You work hard, you work fast, but it wasn’t any big stretch for Jane and I – we’re kind of used to that.

AX: What else have you got coming up?

LANDO: I just finished a movie with another friend from DR. QUINN, MEDICINE WOMAN, William Shockley, who wrote and produced a movie called THRIFT STORE COWBOY. I just finished that – I shaved my head for that one. My hair’s already growing back – that was a month or so ago. I have another short I did for the Web called SPOTLIGHT. That should be coming out soon.

FLYNN: I did a film called STORM HOUSE that’s a supernatural horror thriller that I did in England. I’m not sure when it’s coming out – they’re just finishing post right now. It’s directed by Dan Turner – it’s a lot of fun.

SEYMOUR: I’ve got four movies in the can. I’ve got an independent movie called THE ASSISTANTS, one called THE WAKE that just came out, FREELOADERS with Adam Duritz and LOVE, WEDDING, MARRIAGE with Mandy Moore and Kellan Lutz. It’s a comedy. And then there’s a movie that I helped produce with Trevor Albert that my husband James Keach directed called WAITING FOR FOREVER, with Rachel Bilson and Tom Sturridge and Richard Jenkins and Blythe Danner. It’s great. It’s coming out in February in theatres.

AX: Do people still remember you from LIVE AND LET DIE?

SEYMOUR: In England, yes. Here, I would say it’s more DR. QUINN, SOMEWHERE IN TIME and WEDDING CRASHERS, depending on the crowd.

AX: Was WEDDING CRASHERS a surprise for you?

SEYMOUR: No. I read it and I thought it was genius, it was brilliant. I mean, it was great that I got so much attention for a small role, but I knew it was funny.

AX: Are you finding that because of the rise of repeats on cable, everybody is still familiar with DR. QUINN?

SEYMOUR: Oh, globally. It’s ridiculous. Wherever I go in the world, people are crazy about DR. QUINN. All I ever hear is, “When are you and Joe Lando going to do something together?” And that was what was so great about PRUDENCE, is everybody wanted to see that chemistry again. And I have to admit it was better this time even than DR. QUINN. He’s probably my closest friend in the world. We get along great.