Alec Baldwin moderated the discussion which covered the gamut of politics, his co-stars and getting the controversial film made 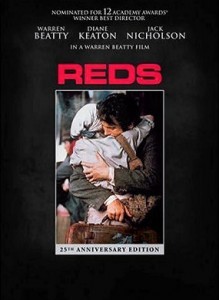 There have been many movies that have lost out on nabbing that Best Picture Oscar, but 1981’s REDS was probably the most glaring snub. Even though it was nominated for 12 awards and writer-director-producer and actor Warren Beatty won Best Director, the film ultimately lost out to CHARIOTS OF FIRE.

Now, 30 years later, it’s clear that REDS was the more deserving movie which transformed the life of Socialist activist, writer and journalist John Reed into a sprawling three and a half hour saga.

To honor its anniversary, the 2011 TCM Film Festival had a special screening Saturday night, and it was a reminder of what a great film this truly was. It also showcased how Beatty didn’t candy coat the subject and created, at its heart, a very romantic story between Reed and Louise Bryant (Diane Keaton) which was always the anchor when dialogue, politics and history were rattled off at a rapid pace.

Warren Beatty was in attendance at the screening, and after the film, his good friend Alec Baldwin moderated a special discussion afterwards. What transpired was a rather fun and lively discussion. Having Baldwin at the helm, really made Beatty relaxed and much more forthcoming than he normally is in interviews (though he still does his trademark trailing off on random tangents). Even more surprising was Beatty’s willingness to stay longer and answer questions from the audience, even though another screening was scheduled shortly thereafter.

The following are some of the highlights from that conversation.

On wanting to bring John Reed’s story to life …
“I thought it was a good character,” says Beatty. “I was in Moscow at one point, and they tried to get me to make a movie about John Reed and I didn’t like what they had. [I thought] “This is not good – to let the Russians make this movie.” Then I began the research process. I never liked the idea of playing him because he was a cheerleader at Harvard from that famous class of 1901.

On the conflicting information and testimonies regarding John Reed that Beatty discovered during his research …
“Henry Ford says ‘history is bunk,’” notes Beatty. “And Winston Churchill said, ‘History will be very kind to me, because I intend to write it. “I found all these conflicting testimonies to be particularly interesting to me. I’ve done a few bio pics. I did BONNIE AND CLYDE and BUGSY. There is no real solid. You take liberties in developing a story. You take what you think it means and what’s important to you.”

“There is a story there and it gives you a spine you have to go with it and somehow it adds up to something,” continues Beatty. “We all have our lives and what interested me at that point was the personal life, the political life and artistic life and they are all in conflict with each other. It’s interesting for me to see it here, when you see the way things have to happens now to open [a movie] on 3000 screens rather than a few screens. You can’t take the liberties we took on this. You can’t risk boring an audience for much of a time. [REDS] was the last movie with an intermission.”

After Beatty had a big commercial hit of HEAVEN CAN WAIT for Paramount, he took the film to that studio first … but wanted Charles Blühdorn whose company Gulf + Western owned Paramount at the time to sign off on it …

“We went to New York and I had what I guess was a script and gave it to Charlie to read,” recalls Beatty. “I sat outside, the way you sit outside a dentist’s office – just sit and wait. [Studio Chairman] Barry [Diller] and Michael Eisner were there and they looked with fear on this thing, I went in and met with Charlie. He said, ‘how much is this thing going to cost?’ I said ‘I don’t know.’ I said ‘I know someone else will make it, but I wanted to bring it to you first because you’ve been very good to me. He said, ‘Let’s say it was going to cost $30 million dollars, tell you what [I’d like you] to do. Take $30 million, go to Mexico, spend $1 million and keep $29 million for yourself, just don’t make this picture.’ And I said, ‘no, I’m going to make this movie Charlie … I think it’s a good movie. There are the people to admire in this,’ and they said, ‘we’ll make this movie.’”

On directing, acting and producing a movie ..
“It can’t be done,” says Beatty. “You can’t do it, but it’s sometimes better than the alternative. The job is to be out of control as an actor, but the job as a director is to be in control … I always would rather have somebody else do it. It’s hard for someone to see that you meant. On this movie. I didn’t even try. I knew what I was going to do and what I was going to do on it.”

On casting …
“Here’s what I feel about writing particularly in film – casting is the writing,” Beatty says. “If you say character is plot, well, in a movie particularly, casting is character. So casting is plot. This movie you just saw is so dependent on Diane Keaton. She’s a formidable person from dark levels to light levels, and Billy Wilder once said something to me, “I would never write a movie unless I knew who was going to be in it” and I thought “Aren’t you a big deal.” It haunts me though, because he was so right. As soon as you cast someone in what you’ve written, if it’s not who you were thinking, it’s a rewrite. There are a number of great actresses who were Diane’s contemporaries, and [if I cast them] I would have made a different movie. That’s what I think about that.

On remembering the film’s reaction in 1981 …
“Looking at this now, I remember it inspired a certain amount of anti-communism in the public and in some writers for certain journals,” says Beatty. “I remember being attacked about the dog that this is ‘sentimental bulls**t’ and also the love relationship tensions in it. And I’m a delicate flower, I don’t like it when people say things aren’t perfect. I take a long time to make a movie and this was basically created in the late ‘70s. and the thing besides the capitalism, communism, socialism, communist party labor, at the same time, the most important revolution that has occurred in our lifetime and continues to occur, is the liberation of the female. We’re seeing the ramifications of that now. I believe it’s at the root of Islamic Fundamentalist terrorism. The anger that Diane is able to bring in relation to that, I think is important. A lot has changed since the fall of the Soviet Union and, the Social Revolution. It really has to do with haves and have nots in 1911 or now you see resonance in the Middle Eastern mess that exists now. And I didn’t see any movies at the time, that were getting to this.”

On how movies and technology have changed …
“I find myself watching this thinking ‘this is taking too long with telegrams,’” says Beatty. “That’s the sign of the times. I sometimes wonder when I say the change in movies that has taken place, it actually began with a movie called BREAKOUT that Charlie Bronson made that had 30 seconds that were really good. I don’t mean to be dismissive, but it was the first film that went to the unheard of 600 theaters. [Universal Head] Lew Wasserman who had JAWS said, ‘let’s try that.’ You went from 600 theaters to 3000 to 5000. The thing has to get to a medium line, it always has a big effect on the writing and on what happens to a screenplay. I think now, you’re in the middle of revolution of how and where to see movies themselves with screens at home getting larger … or smaller.”

On where moviegoing is heading …
“You can see a coming war between exhibitions and production,” says Beatty. “I think ticket prices are going to have to be variable. When somebody goes out to spend a tremendous amount of money, why should it be the same as the other. I was on to that when I made this movie. I knew I made a three and half movie no one was making at the time and knew it could only play one time a night. I had someone find out if the core audience of this, and we weren’t stupid, it was liberal intellectuals, if they would pay double. [We found out], yes they would pay double. They would also pay triple. They would also pay four times, but five times they wouldn’t pay. I think it’s going to change. I think the price of tickets will change and I think we will have access to that.”

On working with Elia Kazan on his first film SPLENDOR IN THE GRASS …
“Stella Adler says ‘talent is energy’ and Kazan was energetic, and I learned so much from him, not only from directing and acting, but from producing,” says Beatty. “He was very practical. He had to put up with a lot of that old guard we all wish were back now, rather than the corporate committees who makes strange decisions based  mainly on the star.”

On how often he’s sold out …
“I would say, not very often,” admits Beatty. “Sometimes I’ve done things that were maybe lighter and little bit sillier, but I didn’t do it for the money really. I did it to have some fun. Usually they’re not very much fun. Katherine Hepburn used to say, ‘a happy movie is a bad movie.’ For me, I became a kind of control freak early, so for me, I always say, making a movie for me is very similar to vomiting. I don’t like to vomit, and I don’t vomit that very often, but there are times that you don’t want vomit, but you may feel better if you do. That’s what generally happens. It happened on REDS and most every movie I produced. I tried to avoid making it for a long time.”