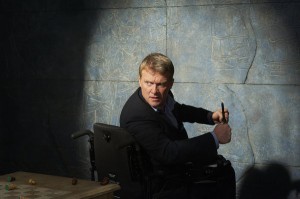 WAREHOUSE 13 decided to go out this season with a bang. Literally. The two part finale “Emily Lake / Stand” deals with a ton of loose ends from last season and this season, and also creates a HUGE set of cliffhangers for next year!

Walter Sykes (Anthony Michael Hall) complex plan of revenge and restored limbs took a special back to back set of episodes to tell, and not everyone made it out alive. Awhile back Jinks (Aaron Ashmore) got canned for pulling a gun on Mrs. Frederic (CCH Pounder) which actually turns out to be the Regent’s scheme for disrupting Sykes’ plan and keeping the Warehouse safe, by having Jinks as an inside man. It only kinda works in the sense that it only works to send yet another Warehouse agent buys it way before his time. RIP for the Warehouse’s only openly gay character Jinks. Don’t count him completely out yet though, Claudia (Allison Scagliotti) still has the metronome that was keeping Marcus Diamond (Alessandra Torresani) alive this whole time, and Artie (Saul Rubinek) has an artifact watch that just might undo all of the cataclysmic events of this finale.

So the casualty list for this set of episodes includes Jinks, Walter Sykes, Marcus Diamond, Mrs. Frederic, and H. G. Wells (Jamie Murray). I have no idea how Artie’s watch works but hopefully he can turn back time enough so at least the Warehouse staffers can be saved! I can’t imagine the show without Mrs. Frederic, and I really, really love the characters of Jinks and H.G. (especially now that H.G. has gotten that whole end the world bug worked out of her system.)

So let’s talk about the thermonuclear destruction of the Warehouse itself. Not only was it a tear jerking moment in a series of tear jerking moments during these two episodes for H.G. to sacrifice herself to save the others, but what a spectacular destruction sequence of everything in the Warehouse! The FX team outdid themselves with the wave of artifact fueled nuclear fire racing through and destroying everything in its path and the resulting wasteland was bleak and shocking to see – and then credits (dirty bastards).

Pete (Eddie McClintock) and his mother Jane (Kate Mulgrew) both make it out alive in this finale, which surprised the hell out of me. I kind of figured that Jane would buy it to save Pete and everyone else, but the old girl is still kicking all the way around the world. In a way I’m glad that she’s still around, since I love Kate Mulgrew and wouldn’t honestly mind if she became the new Mrs. Frederic. (I don’t want CCH Pounder to go away mind you, but if she doesn’t come back…)  Plus there was a really nice geek moment with Mulgrew running the aisles of the Warehouse with a Tesla gun…come on it was just like Janeway running around with a phaser, guys!

All in all this was a really well done, paced and exciting season finale for the show. Everyone got to have some nice shining moments on screen, and honestly Allison Scagliotti still continues to impress me as one of the most real cast members of the show. The depth of her emotions was raw and hard to watch and she has some of the best dialogue of the two episodes.  She has rapidly become my favorite on here and I can’t wait to see what she’ll be up to next season.

Well, that’s it for this year kiddies. See you next summer for another round in the Warehouse, or the crater where the Warehouse used to be.