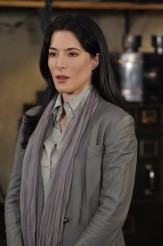 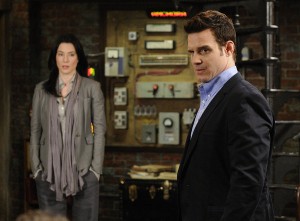 This week’s WAREHOUSE 13 was an interesting episode in the simple fact that “3…2…1” told a multi-part story through several different time periods with Agents of the Warehouse that we were already familiar with. It is nice to see the series tie together Helena’s (Jaime Murray) 1800’s time period with Jack (Chad Connell) and Rebecca’s (Alex Paxton-Beesley) 1960’s and then bring it forward to the current Warehouse and it’s agents.

The whole premise behind this episode involves Joshua’s Horn, an artifact that has been disintegrating people in Pittsburg. This artifact was first sought after by Helena and her partner William Wolcott (Gareth David-Lloyd) at the tail end of the 1800’s and then turned up crashed in a farmhouse in the 60’s. The twist on this one was relatively easy to figure out, but the journey of the episode is really fun.

First off, no Jinks (Aaron Ashmore) in this episode which made me sad, because I love that character and I need more of him. We’re just starting to get his back story and I think there’s a lot of possibilities with that character. But, on the other hand this episode guest starred Gareth David-Lloyd of TORCHWOOD fame, so that made me extremely happy! Like last week’s appearance by STAR TREK’s Jeri Ryan, it’s always nice to see a familiar face from Science Fiction pop up in the current series you are watching. Plus it was fun to see Gareth do period with Jaime Murray.

That is actually one of my only bones of contention with this episode was the location they chose to use for the 1893 rocket launch scene. It looked like a modern day observatory. The walls and doors were blue and the stairs and all of the set decoration just looked far too modern to be at home in the period they were supposed to be in. I realize that shows have to save money where they can, and shooting in Vancouver can have limitations, but they could’ve changed it up with set decoration and lighting. It just made me kind of crazy, since this show is generally very good with period scenes.

Speaking of period, it was really nice to see Jack and Rebecca again. I honestly thought those agents from the 1960’s period of the Warehouse were a one off and wouldn’t be back, so it was nice to see them in action again, even if it was only for a few scenes here and there.

I feel like Helena is going to be a regular agent again soon. They keep bringing her back and showing that she is genuinely repentant, so I would expect to see her transition back onto the team sooner or later. Plus I love the steampunk aspects of that character.

One other small note on this episode was the fact that Claudia (Allison Scagliotti) was wearing a No H8 button on her lapel throughout the episode. I have no idea if that was her addition to her wardrobe or someone else’s, but bravo and thank you for lending your support to the gay community and our pursuit of equal rights. It was subtle, but for those who know what it is and stands for, it was there!