The Gilbert family is down by two ... time to get your hankies 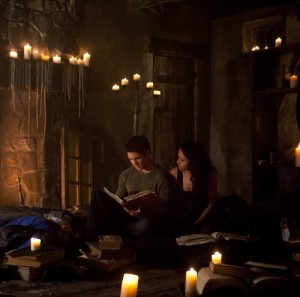 There’s one more episode of THE VAMPIRE DIARIES, but this really felt like a season finale to me. The writers are going the way of BUFFY THE VAMPIRE SLAYER season four, and the last episode will probably be a resolution episode from all of the fallout of this season.

“The Sun Also Rises” is a well-crafted episode that finishes up several plotlines that have been building from the very start of season one and it also opens some doors for bigger things to come. This episode is basically the ending point for the doppelganger storyline which breaks the curse put on Klaus (Joseph Morgan) a thousand years ago preventing him from becoming a werewolf/vampire hybrid. The ending of that story is good since it has dominated this entire season, and is the basis for the whole dynamic between Katherine (Nina Dobrev) and Elena (Nina Dobrev) and why they are identical.

This episode has its fair share of death scenes. The loss of Jenna (Sarah Canning) is horrible and debilitating and it felt like rape. She has been a solid and lovable supporting character, and the way that she goes out is brutal and really pretty awful. I will miss her and maybe since she died as a result of the ritual there is some way to bring her back down the line. (Hey this is fantasy TV…anything can happen.) The death of John Gilbert (David Anders) is even kind of sad in its own way. The sacrifice of his own life so that his daughter would not have to become a vampire was really beautiful and noble, and makes him less of a jackass compared to his performance as a member of the team thus far.

I was glad that Elena doesn’t end up a vampire. I think ultimately that’s where she is headed, but I think it’s way too soon to have her vamp out. In the books she becomes a vampire pretty early on, but I think the series would end up like MOONLIGHTING after the leads had hooked up; the mystery is gone, the rest just seems kind of boring and pointless and you’ve destroyed one of the key dynamics of the show. This series is about a human being in love with a vampire and trying to cope with all of the supernatural elements that come with that choice of loving him.

Speaking of Elena, her survivor’s guilt at this point has to be at crushing levels. She had survivors guilt from living through the car accident that claimed her parents, but pretty much everyone that has died this season from Jenna to John to even Isobel (Mia Kirshner) are all directly connected to decisions that she has had to make in her life. Please don’t think I am out and out blaming Elena for the deaths of those around her, but in the character’s mind I can imagine the writers are going to have some issues to deal with next season.

Bonnie (Katerina Graham) swooping in to save the day way expected and nifty, but I really wanted more from the effects department. She is channeling the power of hundreds of dead witches here kids, you think we’d get more than some wind and fire! I needed her levitating and using energy blasts and ripping Klaus up with her powers.

Klaus and Elijah (Daniel Gillies) took off, and I guess I can see why the writers did that. It doesn’t pay to create really awesome bad guys and then just kill them off – otherwise you’d be a Tim Burton BATMAN movie. Bad guys are meant to stick around to plague heroes from time to time, so I expect we will see the ancient vampire brothers again.

Damon (Ian Somerhalder) is still dying from a werewolf bite, and I have no idea how they will get him out of this one. I figured the blood of Klaus since he’s a hybrid would do it, but since he took off now maybe Damon has to drink from the werewolf that bit him?

There’s still some plot threads dangling that we’ll see next week what gets resolved and what gets left for the next season of THE VAMPIRE DIARIES.

Leave a Reply to Cameron