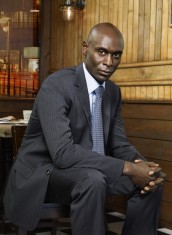 The actor talks about being both Broyles, plus JONAH HEX and jazz 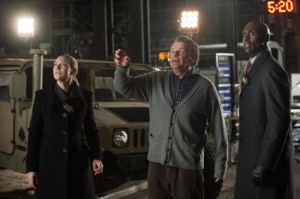 On Fox’s FRINGE, which has its third-season finale tonight at 9 PM – it will be back for a fourth season – the agents of the government’s Fringe Division answer to Lance Reddick’s stern but humane Phillip Broyles. This has been true both in our own universe and the alternate universe, although alternate Broyles perished helping this world’s Olivia Dunham (Anna Torv) escape the government and get back home.

Baltimore, Maryland native Reddick (previously a regular on THE WIRE and Matthew Abbadon on LOST) says he’s been having a great time as both Broyles, something he elaborates on in this exclusive interview.

ASSIGNMENT X: We’re continuing to go back and forth between universes on FRINGE, but the alternate-universe Broyles …

LANCE REDDICK: Is no more.

AX: How far along was FRINGE when you knew there would be two of Broyles?

REDDICK: I think once we figured out there were two universes, I asked one of the show runners – this is going back a ways – I asked Jeff Pinkner some time just after halfway through the second season, “Are there alternate versions of all of us?” And he said, “Yes.”

AX: How did you feel about the alternate-universe Broyles storyline, where he was still married and had all of the emotion of being the father of a fragile child?

REDDICK: I loved that storyline. The ironic thing is that my real-life son’s name is Chris, which is the name of my son in the show. So that was a little eerie [laughs]. It’s great stuff to play and it’s great stuff to act. And in an odd way, it helps inform both worlds, because I got to have an experience, kind of, of what it was on a more personal level, rather than just in my imagination, what it was that the primary Broyles lost, or gave up, because of his obsession with his job.

AX: How did you play Broyles Two differently than Broyles One?

REDDICK: Well, I would say the biggest difference in the way that I played them is that [alternate Broyles was] more relaxed and he’s got more of an accent. His speech isn’t as proper as original Broyles.

AX: Did you have fun bouncing back and forth between the two characters?

REDDICK: I loved it. I loved playing alternate Broyles so much, because he’s so much more relaxed. Even though the Fringe team in the alternate universe is much more militaristic, I felt like his relationship with them was more like he’s one of the guys – I say “one of the guys” – and Olivia.

AX: When much of alternate Broyles’ body comes over to this universe, did the practical effects people have to take a cast of you?

AX: Did you get claustrophobic at all during that process?

REDDICK: I didn’t get as claustrophobic as I thought I would. And also, I think it’s a lot more humane than it used to be. It didn’t take real long.

AX: Did you ever think that this universe’s Broyles might pull a Walter, go into the alternate universe and present himself to the alternate-universe wife as her husband?

REDDICK: That’s occurred to me, but that would be tricky, because he’s loyal to his universe and to his responsibility as the leader of the Fringe division.

AX: Do you have a favorite episode from last season? 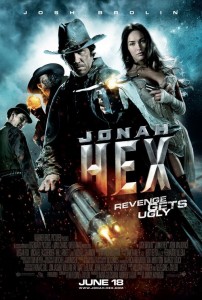 AX: Last summer, you appeared in the Civil War supernatural action film JONAH HEX. How was the experience of doing the movie?

REDDICK: Well, not being one of the writers, I don’t know exactly what happened, but my understanding is, they shot the movie. I don’t know if it the studio [that requested changes], but they ended up reshooting a large portion of the movie, and so I was in the reshoots.

AX: So your character was not in the original?

REDDICK: No. The ironic thing about it is, I was originally cast as another character in the first version of the film, and that character got cut.

AX: Who were you playing in the first go-round?

REDDICK: In the first version of the film, I played this black Confederate soldier, who is a ghost – it’s a battle scene that Jonah Hex gets caught in the middle of. It’s a ghost battle scene, so they’re all dead. And it was this long, three-page scene.

AX: It seems like when they make Civil War-era movies when Confederate characters are the good guys, there’s always a scene where it’s revealed that the Confederate hero doesn’t personally believe in slavery. The character that you wound up playing seemed to be there for the purpose of defanging the idea that Jonah was racist because he fought for the Confederacy. Did you have any take on that aspect of the film?

REDDICK: How do I put this? I think there’s some merit to that [viewpoint]. Once again, I don’t know – I have a feeling that that was more a studio decision than a writing decision, and for me, people said, “Can you do this?” and it was an opportunity to do something that was very different from anything I’d done before, so for me, it was more a decision about the role, not its position in the [story]. I enjoyed just being able to do something completely different from [anything] I’d done before.

AX: What would you say is the key to playing Broyles? What is his core?

REDDICK: For me, there are two things. He’s ex-military, I feel like he’s very grounded. On the one hand, he’s a compassionate man. On the other hand, he’s got this enormous capacity for violence and he’s a great leader. And more than anything else, he really believes in what he’s doing.

AX: How does Broyles feel about Walter and Peter and Olivia?

REDDICK: Well, at this point in the show, talking about Broyles in the primary universe, there’s a scene in I think it’s episode twelve of second season where Peter and Olivia are trapped in a building that’s been quarantined, because there’s a contagion. And Olivia finds out that she’s immune, and she comes out, but Peter catches it. And so Walter and Astrid go in, in hazmat suits, to figure out what’s going on. And they decide that they can’t let anybody outside and they need to let whoever is in there just die. And I say to the head of the CDC, “Give me five more minutes, give Olivia five more minutes to try to get the antidote in there, because there are people in there that are like family to me.”

AX: How did you enjoy making the musical FRINGE episode, “Brown Betty”?

REDDICK: That was a lot of fun. It was really nerve-wracking, because I had to play and sing at the same time.

AX: Do you have a musical theatre background?

REDDICK: It’s funny, because I was trained as a musician. I was a musician originally, I came to acting much later. But I never did much musical theatre, per se. The music that I write now is jazz. I worked as a jazz musician before I did [acting]. My music is on my website and it’s mostly jazz, but mostly I trained as a classical musician.

REDDICK: Well, I didn’t know if it was a good thing, but I didn’t think it was a bad thing. Maybe I’m naïve, but I don’t think it necessarily meant anything about the life of the show, because the fans are so rabid.

AX: Do you have any hopes of what you may get to do with the Broyles in the future?

REDDICK: That’s tough, because a lot of my favorite stuff to do with the primary Broyles – I hate to put it this way, but it’s evaporated a little bit, because that was all kind of the mysterious stuff in the first season. But by the same token, we’re seeing the breakdown in the primary universe of the fabric of reality that’s happening in the alternate universe. So with that, I think, Broyles’ higher connections – he makes a reference to, “I have to go talk to the President” to okay a a particular procedure. So I want to see more of that backdoor stuff that Broyles had been involved with before, and I also want to see him revisit his relationship with his ex-wife, because I think it would be not just an interesting but an important development for Broyles, because I think one of the key things that happens when Broyles sees his alternate self dead and when he asks Olivia about [the alternate Broyles] in the following episode is that he really starts to [re-evaluate his choices]. I think it’s always in the back of his mind, because we’ve discovered Broyles is still in love with his ex-wife and he really regrets the decision that he made.

AX: Do you have any other projects coming up that we should be looking out for at present?

REDDICK: No, not at the moment. There’s a film I’m trying to produce. I’m definitely trying to fill my space up during the hiatus.

AX: Is there anything else you’d like to say about FRINGE right now?