All kinds of trouble in Mystic Falls post hiatus 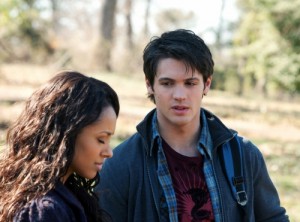 Well, we can all do a little bit of a happy dance now that THE VAMPIRE DIARIES is finally back from hiatus! I realized that to stretch out seasons and ratings, series have to go on hiatus which makes me hate them, but then when they come back all is forgiven and I welcome them with open arms.

Last episode’s big ending with the return of Isobel (Mia Kirshner) set the stage for everything to go down. First off, it completely screws Alaric (Matt Davis) and Jenna’s (Sarah Canning) relationship since he just told her his wife was murdered the same night she turns up on the doorstep. This in turn makes Jenna lash out at Elena (Nina Dobrev) who also reveals she knew Isobel was alive this whole time. WHOOPS! It was nice to have the new episode pick up literally where the last one left off, not even a fraction of a second later.

So Isobel is back in town, Catherine (Nina Dobrev) never left. And there is still the looming doom of ancient vampire Klaus coming to get the moonstone, Elena, and Catherine and whisk them away so he can walk in daylight whenever he wants and pass the curse of the moon permanently onto the werewolves. Basically, this means “Know Thy Enemy” is full of twists, turns and deceptions.

Now that Bonnie (Katerina Graham) has gotten her powers back she is literally the only hope for everyone who wants to survive the coming of Klaus. Jeremy (Steven R. McQueen) of course, doesn’t want her using the powers of a hundred dead witches, because Bonnie will die in the process, so more angst there, but we’ll see if they really decided to kill off such a strong and entertaining character.

Stefan (Paul Wesley) and Damon (Ian Somerhalder) didn’t have a lot to do this episode, except hang around and look pretty, which is fine because they both have no trouble at achieving that.

Isobel is now officially bye bye. I have a feeling she immolated herself in the sun because she was compelled by Klaus. At least that was the general gist that the scene was trying to get across.

Klaus by the way is for the time being in Alaric’s body, and he’s so glad to have Catherine back. So, you know that’s not going to end well for anyone.

Meanwhile, Caroline (Candice Accola) bares her soul to Matt (Zach Roerig), only to have him run off (unbeknownst to her) and tell the whole story to Caroline’s mom the Sheriff (Marguerite MacIntyre). The sheriff willing had herself compelled to forget that Caroline was a vampire a few episodes back, but of course she doesn’t know that, so the fit is hitting the shan again. It’ll be interesting to see if Caroline makes it out of this one alive.

A nice busy episode that ends with Elena deciding that John (David Anders) is the only parent she has left, so she might be willing to give him another chance. Lots of threads hanging kiddies as we head into the later quarter of this second season!