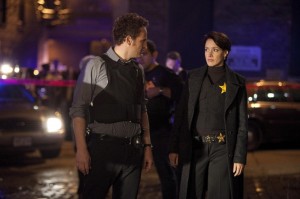 There have only been a couple of episodes of THE CHICAGO CODE that haven’t lived up to the show’s enormous potential, and sadly “Black Sox” is one of them.

The police procedural elements, usually so dead-on perfect and engaging prove to be unspectacular, while all the ongoing personal drama keeps this episode from going completely to the dogs.

The story begins with a hate crime in one of Chicago’s gay communities. As always, Wysocki (Jason Clarke) and Evers (Matt Lauria) have to be very careful with this case which has a couple of twists that were too obvious, even by standard cop show formulas.

Meanwhile, Superintendent Colvin (Jennifer Beals) decides to finally show her hand to Alderman Gibbons (Delroy Lindo) when she goes head-to-head with him with an incestuous “promotion” program wherein Gibbons wants to promote his choice, and Colvin hers. Colvin gets her way, which tips Gibbons off to the fact that she’s actually been playing against him the entire time.

The big drama though is between Wysocki, his ex-wife and his new fiancée. He clearly still loves his wife, and tells her that – that he chooses her, but she rejects him. Then, Wysocki tells his fiancée the truth – that he’s been sleeping around with his own ex-wife.

This was definitely one of the more interesting dilemmas in the series and definitely made Wysocki a more interesting anti-hero, who may be pure as snow on the job, but personally, his life is a mess. Part of confessing comes from his niece Vonda (Devin Kelley) discovering that her own father (who was slain on the job) was not the man she thought. In fact, he had a mistress on the side who he intended to marry.

Infidelity is a major theme in this episode and the theme is so transparent and obvious at times, it detracts from the storytelling.

Still, the biggest problems with “Black Sox” comes from the police procedural elements. While the series could have found a better way to sketch out this plot, it comes off rather stilted and filler for the greater drama playing behind the scenes.

An okay action sequence and some great acting on Clarke’s part, continue to make THE CHICAGO CODE rise above even if the episode is misguided like this.

The other positive is Fox promoting the last episodes as the two-part “Season finale.” Previously, the promotions have hyped that it’s “the last four episodes” and so on, and now they’re calling it a season finale. It doesn’t mean the show is out of the potential cancellation doghouse yet, but at least now it has a fighting chance.