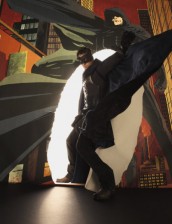 Good plot twist at the end, but the attempt at Fifties-style horror is a little too retro to be effective

THE CAPE generally does a good job of maintaining a sense of comic book integrity, balancing the genre’s conventions without tipping over into things that don’t work. However, in “The Lich Pt. 1,” a cliffhanger that will resolve next week, the attempt to do Fifties-style horror falls short. The reason for this is that unless the viewer hasn’t checked out any horror since the Fifties, it just isn’t scary. This in itself wouldn’t be a problem, but as the episode insists that what we’re watching is creepy and the characters react with fear, the result is a loss of internal cohesion, as well as a story that doesn’t quite hit its stride, despite a good twist at the end.

We learn from ex-cop Vince (David Lyons), aka the Cape, that the Lich is the name that the Palm City police have long given a mysterious killer whose crimes seem almost supernatural. The Lich seems the likely culprit when Janet, a girlfriend of Rollo’s (Martin Klebba), digs her way out of her own grave and is found violent and psychotic.

Our guys bring her back to Max’s (Keith David) circus, where resident hypnotist Ruvi (Anil Kumar) tries to bring Janet back to herself. Vince deduces that the Lich is planning to unleash his zombie-making powder on the Palm City citizenry during an upcoming parade. This means the Cape has to convince police chief (and Vince’s former best friend) Voyt (Dorian Missick) to help him stop either the parade – which Fleming won’t allow – or the Lich.

At the same time, prison chief Patrick Portman (Richard Schiff) is desperately trying to block Fleming (James Frain) from taking over Palm City’s port. The area actually belongs to the Chandler family, but they have all died out except for a missing heir, Carlton. Orwell (Summer Glau) tracks Carlton (Glenn Fitzgerald) to the local asylum, where he’s got a huge room, but when she meets the disturbed heir to the Chandler fortune, it turns out Carlton is the Lich.

There is something legitimately unsettling about Fitzgerald’s sweaty, unhinged heir, so in that sense, “The Lich” works. However, the powder that makes people appear dead and renders them suggestible is a plot device not used to particularly good effect, much less to a frightening one. As Carlton isn’t nearly as incapable as he seems when Orwell first meets him, it is to be hoped that the second half of the story provides a persuasive reason why he didn’t just claim his inheritance ages ago – what we’ve seen so far doesn’t wash, even in the world of THE CAPE.

It’s also rather disappointing that the episode manages to give Max a reasonable amount of screen time and still doesn’t let him do anything, and for that matter doesn’t let the Cape strut his stuff much, either. “The Lich” has an evocative title – let’s hope the second half of the saga rises to its moniker.