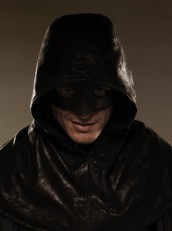 An action-filled episode that serves to advance the series’ mythology, as well as the personal situations of the characters

Wasting no time for its audience or its characters, “Tarot,” the second episode of THE CAPE gets into all kinds of mayhem in no time, as our hero Vince Faraday, aka the Cape (David Lyons), seems to get the drop on his arch-nemesis Chess (James Frain) – only to be felled by poison delivered by Cain, aka the Chef (Raza Jaffrey).

Vince manages to jump through the window of Chess’ high-rise, with the cape slowing his descent enough to avoid turning him into Splat-Man, and he’s rescued by Orwell (Summer Glau), who’s angry that Vince failed to include her in this endeavor. Circus owner Max Malini (Keith David) is likewise none too pleased with this rogue effort on Vince’s part. He heals Vince from the poison, but takes away the cape. Vince refuses Max’s offer of airline tickets to get Vince and his family out of town. Instead, Vince recovers and crafts a mask for himself.

Meanwhile, Orwell uncovers Chess’ plot to take over the city’s prison system, so she and Vince try to protect Secretary of Prisons Portman (Richard Schiff) from assassination attempts by Chess’ hired hit man Cain. Orwell’s research shows that Cain is a member of an order of assassins known as the Tarot, so secret and deadly that they would never have come up in the course of even Vince’s erstwhile undercover police work.

“Tarot” maintains the nice balance of seriousness and tongue in cheek established in the pilot – when the masked Vince introduces himself to the already exasperated Portman as the Cape, Portman points out, “You’re not wearing a cape.” The action is swell – Glau’s fans will be especially glad to see that the physical talents she has displayed in earlier roles are brought to bear here.

Schiff is a great guest/recurring character and Jaffrey is fun as the insinuating baddie of the week. On the downside, there’s not enough of David’s magical Max and there is at least one too many flashbacks to Vince’s happy past with his wife (Jennifer Ferrin) and young son (Ryan Wynott). We get that they motivate him; we get that they miss him – the scenes just aren’t entertaining enough on their own to justify the underscoring they provide.

Meanwhile, it’s fun to see the larger chess game being played with the main villain’s political ambitions, especially because aspects of this will resonate with viewers who care to read real-world similarities into the situation. Mainly, this is well-toned entertainment with lots of old-fashioned stunt choreography to relish.