If Earth wasn’t in enough trouble in the first season of ABC’s reboot of the Eighties alien invasion series V, now there’s a power struggle among the Visitors, an alien/human baby, deadly red rain, homicidal reptile tails and new cast members to contend with.

V show runner Scott Rosenbaum – with some additional thoughts from actor Joel Gretsch, who plays Father Jack Landry (stay tuned for our exclusive interview with the performer) – talks to us about how the war is going, the guest cast and why Gretsch wishes Rosenbaum could visit the set more often in the first part of this exclusive interview.

ASSIGNMENT X: Did you rethink V in any way between Seasons One and Two, or are you going on the course that was established in Season One?

SCOTT ROSENBAUM: The storyline continues from where we ended the last season. It takes place right after the release of Red Sky. In terms of the type of storytelling that we’re doing and the style of the show, I think it’s definitely changed a bit – I think it’s more quick-paced, it’s more action-packed, there’s a lot more story being revealed, certainly a lot of things we didn’t see in the first season. For instance, you see what the entire Visitor looks like under his skin. So I think it’s changed in really positive ways, but in terms of jumping into the storyline, it takes over right from where we left off. 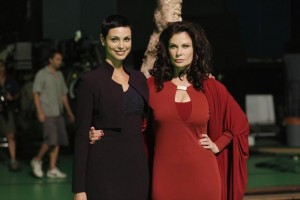 ROSENBAUM: Yes, we have Jane Badler and you see her for a brief moment at the end of the premiere, and [the second episode of Season Two] was the first big Jane Badler episode and she has a very big storyline. We find out where she’s been, what she’s been doing, why she’s been hidden down in this prison cell. And then Marc Singer of course comes in at the end of the season.

AX: But they’re not playing exactly the same characters that they were before …

ROSENBAUM: No, they’re playing entirely different characters. Jane’s character – it’s the same [name as the character she played originally], but it’s an entirely new character that never existed before. Obviously, it couldn’t be the same character, because then the people would be like, “Oh, the Vs are back,” because they’d remember them from the Eighties. So they’re both entirely new characters. We’re sort of paying homage to those actors and it turned out ultimately that we had these roles and they auditioned and they were the two best actors for the roles, so they got them. 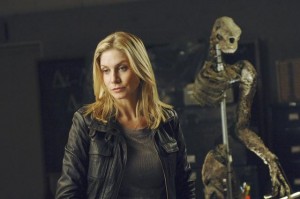 AX: Genre star Robert Englund played kindly Visitor Willie in the original series. Have you reached out to him at all?

ROSENBAUM: Not yet, but I will for Season Three.

AX: And since Joel Gretsch is standing here, can you talk about casting him as Father Jack?

JOEL GRETSCH: Why did you cast me?

ROSENBAUM: Look at him. Would you not cast him? Not only is he handsome, but he’s talented and he’s a sharp dresser. Look at that.

GRETSCH: I’m the best-dressed guy who walked in the room, that’s why I got it.

ROSENBAUM: Interestingly enough, though, I did not cast Joel, because I came onto the show after Joel was cast. The creator of the reincarnation of V, Scott Peters, worked with Joel on THE 4400. Joel was one of the leads on THE 4400 and he was wonderful in it for four years, and Scott Peters was thrilled that he was even available, and that’s the way I’d cast that role myself, because I couldn’t think of a better actor to have in that role.

GRETSCH: Well, in Season Three, I’m throwing it out right now – you’ve got to move up there [to Canada, where V is filmed]. We’ve got to see you every day, because – I remember talking about this before, but to have someone like Scott, to listen to his mind work when he talks about storytelling and to [have him] be on set, it’s such a valuable thing to be able to have, not necessarily to see where we’re going, but just to be part of that, the unity of it, and I think that’s what’s been great about the end of wrapping Season Two, we’ve been able to spend more time that way together.

ROSENBAUM: What he’s talking about it, I’m not always able to be on set, because I’m in L.A. writing the scripts, editing, handling all the other facets. Usually on the season premiere and the season finale, which I will write myself, from the very beginning, I try to go off and be on the set and supervise and just be there for questions and stuff like that. So that’s what he’s referring to. I’m always there in spirit.

GRETSCH: I just miss you.