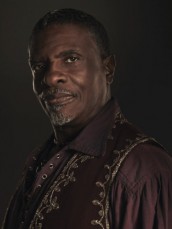 In the first episode of THE CAPE’s two-parter “The Lich,” the creative team tried a bit too hard for Thirties-style creepiness and wound up with something that didn’t quite work. In the second half, writers Toni Graphia & Robbie Thompson and director Roxann Dawson go instead for ALICE IN WONDERLAND-esque trippiness, with better results.

The trippiness is mostly courtesy of Orwell’s (Summer Glau) condition. As “The Lich Pt. 2” opens, she has been tricked, held captive and drugged by the deformed, brilliant yet insane Lich, aka Conrad Chandler (Glenn Fitzgerald), an incredibly wealthy Palm City resident who has spent his life hidden away in an asylum. The Lich wants to marry Orwell, imagining that she loves him. The substance he gives her to keep her motionless and without protest causes Orwell to hallucinate that she’s going to marry Vince (David Lyons), aka the Cape, with her dad Peter Fleming (James Frain) – aha! – showing up to give her away.

In reality, Vince is frantically trying to find Orwell, going so far as to have his son Trip (Ryan Wynott), who knows him as the Cape, introduce him as the Cape to Vince’s wife Dana (Jennifer Ferrin). Once Dana gets over her shock and suspicion, she helps get the Cape in to see a witness (Tom Noonan) who is in thrall to the Lich. Vince uses the hypnotic skills he’s learned at the carnival to break through the drug-induced code of silence. Then Vince, Max (Keith David) and Rollo (Martin Klebba) get into the Lich’s secret hideout, subdue a horde of henchmen and rescue Orwell, who rewards them by revealing her secret identity as Orwell to Max and the circus crew.

Some of the revelations don’t play all that explosively. The biggest surprise in Orwell telling Max, et al, that she’s Palm City’s enigmatic blogger is in our remembering that this wasn’t already known – seeing the latitude the circus folks have given her, it’s not like this is going to change much. As for Orwell being Fleming’s daughter, this has been so foreshadowed that it’s hard to imagine many viewers won’t have guessed this several episodes back. However, we do learn that Orwell’s name is “Jamie,” a nice bit of trivia, if nothing else.

The meeting between the Cape and Dana isn’t as emotionally potent as it should be because it doesn’t get the breathing room it needs. The episode has so much incident that there’s no time to see Vince’s reaction to speaking to Dana after all this time, nor Dana having any sense that this guy seems strangely familiar, attractive, etc. Still, it’s a good story element to have, if only the series was going to continue past next week’s episode.

However, Orwell hallucinating that she’s going to marry Vince is intriguing, especially as Lyons plays Vince very differently in these surreal episodes than he does the rest of the time. The Lich’s drugged but fast-moving crew of zombies do get to be a bit creepier this time out because they are armed, fast and outnumber the heroes, though between Vince’s skill with the cape, Max’s general craftiness and Rollo’s aggression, we know there isn’t much to worry about. The script also finds a good, narratively economic way to solve the plot maguffin (control of Palm City’s ports) without having them actively run by either our regular psycho Fleming/Chess or guest psycho Chandler/Lich.

There are things about “The Lich Pt. 2” that could be improved, but overall, it’s diverting.