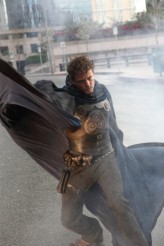 Chess hires a pair of contract killers to take down the Cape in an episode that has its moments, but the episode lacks momentum

THE CAPE usually has well-structured episodes that have multiple levels and good payoffs, but while “Goggles and Hicks” has a fine guest actor in Pruitt Taylor Vince – and a nicely scary turn from Chad Lindberg as his partner/brother – it feels a bit haphazard overall.

A prologue shows us how adept hit men Goggles (Vince) and Hicks (Lindberg) are at their work, even though Goggles is confined to a wheelchair. He’s the strategist, with Hicks as the actual triggerman. Peter Fleming/Chess (James Frain) offers the duo double their usual fee if they can kill the Cape within twenty-four hours, even though Goggles states his preference for getting to know the target inside and out before striking.

Goggles’ research and an excellent, hard-to-detect tracking device soon yield the Cape’s true identity as Vince Faraday (David Lyons). Unaware he’s being watched and trying to take some downtime while recovering from previous mayhem, Faraday moons over his old house. In a subplot, Faraday’s son Trip (Ryan Wynott) finally makes a friend when a new kid moves in downstairs.

It’s fairly easy to foresee the beats here. We know that techno-whiz Orwell (Summer Glau) will eventually find the tracking device, we know that Faraday will prevail and we know that his secret will be safe – in this instance, because Chess inadvertently double-crosses himself via that old plot standby, a villainous snit that has to suffice when the hero can’t outsmart him.

There is some fun stuff here, like a remote-controlled drone, and actor Vince is the soul of assurance as the comic-book-loving assassin who knows pop culture as well as he does the tools of murder. Lindberg has the kind of thousand-yard stare and low, inflectionless voice that make his Hicks someone you wouldn’t want to meet on a dark road, or anywhere else for that matter. However, matching the Cape up against a guy in a wheelchair, no matter how lethal, isn’t exactly cinematic, and the material with Faraday’s grieving wife (who thinks she’s a widow) remains drippy heavy going.

There’s a good show here, and for those who enjoy THE CAPE overall, “Goggles and Hicks” provides entertainment, but this isn’t the episode to introduce the series to newcomers.