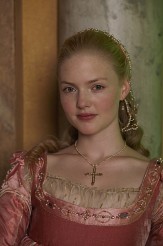 Only four episodes in and the pace is dragging

Stars: Jeremy Irons, François Arnaud, Holliday Grainger, Colm Feore, David Oakes, Derek Jacobi, Joanne Whalley
Writer: Neil Jordan
Director: Simon Cellan Jones
Network: Showtime, airs Sunday nights
Original Telecast: April 17th, 2010
THE BORGIAS has officially slowed down to an agonizing pace. The rest of the season will determine whether or not I decide to watch the second season (if there is a second season). I am sad to say this has become a show that I find myself needing busy work to putter with so I can kind of stay focused, otherwise the urge to get up and wander the house puttering is overpowering.

The first two episodes of this series were a vivacious and interesting look at the foundations for one of the most famous and oldest crime families in recorded history. Then the third episode started to slow down a bit, and now the pacing in the fourth episode, “Lucrezia’s Wedding” is intolerable.

Lucrezia Borgia (Holliday Granger) is getting married off in a political marriage that will only benefit her father’s position as Pope, and allow him to safeguard Rome against his enemies. Of course, the man she is married off to is revealed to be someone who believes in beating women to make them submit to his will, and in the final scene of the episode he rapes Lucrezia as he feels is his right as her husband. Charming. I can only hope that he is one of the first victims of her astounding abilities with poisons that she comes into later in life.

Cardinal Rovere (Colm Feore) continues his search for people to join his side in trying to depose Pope Alexander the 6th (Jeremy Irons), and in doing so commits a mortal sin in the rather grisly murder of a monk that was following him on behalf of the Borgias. Honestly this was one of the only stand out scenes in this episode, as the monk took a knife through the eye in a church confessional of all places, and bled out. This was the ONLY death in this episodes and writer Neil Jordan is going to have to get on the stick and start piling up bodies since I expected to be swimming in corpses this far in.

Cesare (François Arnaud) gets a little cozier with his sister Lucrezia when she passes out on her wedding night, and I honestly thought there was going to be full-blown incest, but not just yet. Cesare turns his attentions to a married woman he dances with at his sister’s wedding and decides to liberate her from her husband (more than likely via assassin rather than sully his own hands).

The Pope pretty much sits around this episode and devours the scenery from time to time, when he is upset about something or in the process of explaining some scheme or other. Jeremy Irons is still entertaining to watch, he’s just not engaging enough to make the entire show move along at faster than a snail’s pace.

Hopefully, we’ll see some faster movement in the plot in upcoming episodes, and lots more mirth and mayhem.