Home » TV Review: SUPERNATURAL – Season 6 – “The Man Who Knew Too Much” – Season Finale 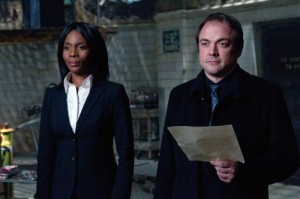 Lanette Ware and Mark A. Sheppard in SUPERNATURAL - Season 6 finale - "The Man Who Knew Too Much" | ©2011 The CW/Jack Rowand

I wonder if next season we’ll get a Rapture-based episode of SUPERNATURAL – it seems like exactly the type of fare that would fit perfectly with the show.

It seems like Season 6 of SUPERNATURAL has been a number of seasons put into one. First, it was Sam (Jared Padalecki) returning from Hell with no soul and working with Samuel, who was in turn working with Crowley (Mark Sheppard), to hunt and gather creatures from the Mother – vampires, dragons, beasts and more. Next, we had Dean (Jensen Ackles) searching for a way to return Sam’s soul back to his body. Then, we had the battle with Eve (or The Mother) that ended pretty much in a whimper instead of a bang. And in-between and now finally, we have the battle of Heaven with Castiel fighting Raphael for control and Castiel pulling all sorts of shady business in the process.

The season six finale, “The Man Who Knew Too Much,” begins when Castiel touches Sam and crashes the thin wall that Death put up in his mind to keep all the bad memories from his experience in hell from destroying him. Castiel did this in order to preoccupy Dean and Bobby (Jim Beaver) while he and Crowley open the gate to Purgatory in order to fight Castiel’s battle for control of Heaven and for Crowley to have more control over parts of the netherworld.

This was indeed an interesting finale. No big battle. No going to toe to toe with foes. No action packed episode. Instead, we got an internal battle with Sam, finding the parts of himself that he had lost – the Sam with no soul and the Sam that remembers the whole experience in Hell. 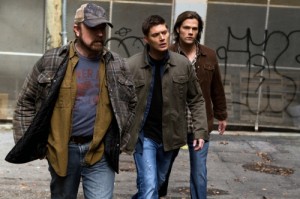 Jim Beaver, Jensen Ackles and Jared Padalecki in SUPERNATURAL - Season 6 finale - "The Man Who Knew Too Much" | ©2011 The CW/Jack Rowand

And who would have thought after all this time that Castiel would end up being the Big Bad of the season – yeah, we knew he was stressed over the whole battle in Heaven, but to wholesale slaughter people, kill his own people, inflict harm on his friends and assume the mantel of “the new God.” Yeah, he’s gone off the reservation just a bit.

But what I really liked about the finale was that it opens up the entire next season. Obviously, Castiel will be the big baddie and he’s maybe the most powerful entity that the Winchesters have ever faced – and that’s been said many times before, but this time it definitely seems to be (unless they need four rings to dispel Castiel as they did Lucifer).

They also opened up Sam’s head with full memories of his time spent in Hell, so that’s another entirely different plotline that is obviously going to play a role in Season 7. Will Sam be able to function? Will he be the Sam of old or someone that will be a vegetable for the first few episodes? Why do I have a feeling that both the Castiel plotline and the plotline with Sam are going to interchangeable? Maybe Castiel put a little something in Sam’s brain that will help them? Maybe the key to getting Castiel to release the souls from Purgatory is inside of Sam? It will be interesting to see what happens.