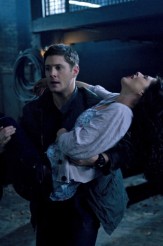 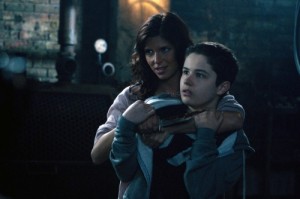 The two-hour season finale of SUPERNATURAL is actually two single serving episodes that they decided to air back-to-back.

The penultimate episode to Season 6, “Let it Bleed,” gives us the run-up to the final showdown – at least presumably – between the Winchesters boys and the partnership between Crowley (Mark Sheppard), king of Hades, and Castiel (Misha Collins), the boys’ favorite angel that has gone rogue in his quest to win the battle for Heaven.

For all intents, this is just a place setting episode, getting all the pieces on the chess board in place for the final main event of the season finale. Castiel, long a friend of the boys and main helper in the prior two seasons, and Sam (Jared Padalecki) and Dean (Jensen Ackles) are at opposite ends of the fight this time. With Castiel partnering with their sworn enemy in Crowley and doing numerous nefarious actions in the process – raising souls for his battle in for Heaven in a variety of ways – the Winchester boys had no choice in going against him.

Crowley’s part of the deal involves him getting access and control over Purgatory, in order to expand his empire from Hades. Castiel in return gets assistance from the demons in order to fight against his angel foes in Heaven.

Things go from bad to worse when Crowley kidnaps Ben and Lisa – the former family that Dean hooked up with at the beginning of this season while Sam lost his memory and was parading around with Samuel. This sends Dean off the deep-end searching for the pair attacking dragons (with his new dragon killing knife) and making deals with Balthazar (Sebastian Roche), who ends up actually helping the boys find where Crowley is keeping the pair.

Lisa gets inhabited by a demon as an insurance policy and before Dean can exorcize her, the demon stabs Lisa causing a mortal wound. Luckily, Castiel saves her and wipes Lisa and Ben’s memory of ever knowing Dean in order to protect them (under Dean’s instructions). While this was a kind gesture from Castiel, Dean says right from the start that it changes nothing.

Again, this was more a set-up to the episode that concludes the season more than anything, but it also does a good job of wrapping up this storyline that started the beginning of the season. With all the pieces in place,  the season ender “The Man Who Knew Too Much” wraps everything up.