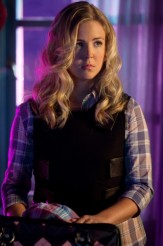 A slow episode with a ton of preaching 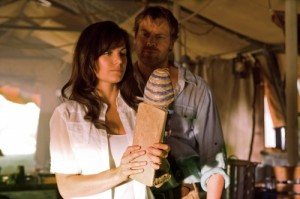 EDITOR’S NOTE: Even though SMALLVILLE is over, ASSIGNMENT X missed a few episodes during Season 10 and will be filling in the reviews during the summer as The CW re-airs Season 10.

After a strong Season 10 premiere, SMALLVILLE gets a little small (and a little too cheesy) with “Shield.”

With Lois (Erica Durance) off to Egypt to serve on the Daily Planet’s foreign desk, Clark (Tom Welling) is playing the dutiful guy and letting her do her thing while still pining away. In the meantime, he has to deal with her replacement – the hero-hating Kat Grant (Keri Lynn Pratt) who feels that heroes shouldn’t be hiding their faces, they should be embracing it. She has a cheery disposition though, and even though Clark secretly saves her from the vengeful Deadshot (Bradley Stryker, she still stands behind her believes. Meanwhile, Clark discovers Deadshot has a bullet with his name on it – and he’s been the target all along. The question now is why?

Meanwhile, Clark has asked Carter Hall aka Hawkman (Michael Shanks) to look after Lois in Egypt, and she immediately figures out what’s going on. It also results in an awkward kiss between the two (more from Hawkman, less from Lois who gets pissed).

“Shield” is one of the many building blocks of Season 10 that lays the groundwork for Clark to come out of the shadows as the Blur and put on the tights to be Superman. There’s a lot of preaching on Kat’s end, and she certainly gets under Clark’s skin (and the audience too – enough already). Yet, it’s clear by episode’s end, Clark is starting to realize some of what she’s saying is right – it’s just there’s not much he can do at this point (give him another 20 episodes to figure it out).

The stuff with Lois in Egypt is kind of underwhelming and it goes absolutely nowhere (it feels more like building blocks for a pay-off later on in the season). After a slam-bang premiere, this is a layover episode – light on major plot developments, but weighted down with heavy-handed dialogue.

Even Oliver Queen (Justin Hartley) is a bit mopey as he discovers Chloe (Allison Mack) has completely wiped the records of her existence off earth – even though she leaves a note professing her undying love for him.

You can’t win them all, and SMALLVILLE hits a bit of a snag early in Season 10 with “Shield.” It’s not the kind of slam-bang episode you’d expect for the final season of the show, but at least the seeds of nudging Clark toward his destiny are in now getting some major attention.