An uneven blend of comedy, horror and COPS that doesn’t seem to know what it wants to be 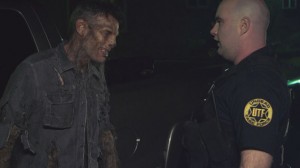 After MTV’s successful first season  of TEEN WOLF, which expertly blended horror and dry comedy, the network takes a second crack at the genre with their new faux documentary series DEATH VALLEY.

The results aren’t as promising.

More comedy than horror, DEATH VALLEY is an uneven blend of COPS, RENO 911 and horror gore comedies like EVIL DEAD. It’s a mixture that should work on paper, but the execution is all over the map with the series unable to decide if it’s trying to be a documentary, a horror film, a wacky comedy or all of the above.

Sadly, all of the above won’t cut if this series is to survive a second season.

The premise is simple: the San Fernando Valley has been overrun with zombies, vampires and werewolves for over a year and the UTF (Undead Task Force) was created to put a stop to them.

The cops are very archetypal (the blowhard, the sex fiend, the rookie, the sassy Latina, etc.) and their deadpan sensibilities carry us through various ride-alongs. The first episode deals with vampire prostitutes and zombies overrunning a doughnut shop.

There’s also a ton of exposition to get out of the way so we understand exactly what the rules are with the various monsters and how the cops handle the situations.

The series is watchable at times, if not for the amazing amount of high quality gore. Yet gore can’t carry the stilted script and bad dialogue. And when the show ends up in the middle of the woods dealing with pissed off Hispanic vampires, DEATH VALLEY literally ends up becoming way too serious for its own good.

One of the funniest bits in the entire episode is a coda at the end where the cops pull over a man in mid-werewolf transformation. It’s short and concise and the type of absurdist humor the series should do more of.

While the series premiere of DEATH VALLEY doesn’t quite cut it (perhaps the very complicated writing credits hint at the troubles they had in the development stage), the previews for other episodes throughout the season look quite promising and could very well improve on the concept.

I want to like the show and am willing to give it a second chance. Hopefully this is a case of the show needing more time to find its tone and rhythm – and that it comes sooner, rather than later.