Strangely, sort of better, but still not good enough 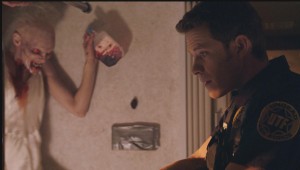 After the first two episodes that were wildly uneven, Episode Three dubbed “Blood Vessels” finds the series almost finding the right balance between the horror and the comedy elements of the series.

It even, potentially has a story happening that sort of makes sense, yet strangely, it all ends up going nowhere making you scratch your head thinking that the whole point of everything we saw was just a bunch of set-ups for jokes and no actual pay-off.

It needs a serious intervention.

The sort-of story involves a bunch of mobile blood banks being hijacked by vampires. Okay, funny enough. Yet when the police officers get there, they run into more zombies than vampires. And why is that?

I don’t know, maybe because zombies overturning a blood bank vehicle provide some cooler “under siege” moments than vampires. However, why go there with vampires, if you’re not going to pay it off.

The B-story involves Captain Dashell (Bryan Callen) asking rookie Kirsten (Caity Lotz) to go undercover to keep an eye on his niece. What she discovers is a bizarre vampire blood cult thing. Again, a pretty good set-up, but the pay-off is confusing, especially when Kirsten doesn’t do anything to stop the vampire (and doesn’t tell the Captain what was really going on there).

Talk about an anti-climactic episode!

All the actors are struggling to find their character’s voices, but Callen seems to be getting the best lines. He’s created a pretty entertaining blowhard who is oblivious to logic and anyone else’s feelings. It’s a character that given time can only get better and Callen is excellent in the role (even if his lines are a bit under-cooked at times).

I also like Lotz. She seems to bringing some interesting shades of gray to the character and she certainly is the only actor “grounding” her character in some kind of actual reality.

One of the biggest problem with “Blood Vessels” is it’s a TV series that is trying to be a normal genre series, but it’s desperately to marry it with the COPS  formula. There are so many instances where having a cameraman capturing this makes no sense whatsoever. Did the den of vampires that Kirsten infiltrates really allow a camera crew into their place? No. It’s impossible. Yet, that’s one of the questions that pops up during those moments in this episode.

Oddly enough, if the show just embraced a shaky-cam style without the camera crew conceit, I think the show would be a lot stronger (and probably funnier).

So there you have it. Another week of wasted opportunities with a series that continually has great gore (and make-up effects, check out the terrifyingly cool vamp above), a few lines of funny dialogue and no focus whatsoever. It should be more, but until the series decides what it actually wants to be, it feels like we’re still going to be in for a longer, bumpier ride than expected.