Not getting better. Not getting worse. It's good for the gore though. 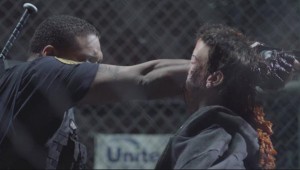 It’s the second episode in for the strange new MTV series DEATH VALLEY and I’m still not sure what to make of it. Like the pilot episode, this series is tonally all over the map. One minute there’s bathroom humor, the next physical comedy and then, for absolutely no reason whatsoever, there’s a moment of honest emotion.

It’s a hybrid show that’s COPS with vampires, werewolves and zombies but also a show that’s about the people filming the show within a show.

With “Help Us Help You,” zombies are a major part of the episode as UTF (Undead Task Force) takes down all sorts of riff-raff in the San Fernando Valley.

The episode focuses on UTF’s new campaign asking citizens to chip in to help with the current monster infestation. This goes horribly awry when kids start beating up slow walker zombies for kicks (only to get bit and turn into fast walkers themselves).

Officers Pierce and Stubeck (Bryce Johnson, Charlie Sanders) try to help out a prostitute vampire they picked up in the first episode. As much as they try to set her on the right path, she ends up dead anyway adding a strange bit of melancholy and melodrama to an otherwise comedic series.

There’s also the bizarro pairing of Police Captain Dashell (Bryan Callen) and rookie Kirsten (Caity Lotz). They end up on a house call, which turns into being nothing more than a rat in the attic. The owners ask them to get rid of it anyway, which turns out to be a bad idea. Not as funny as it should have been.

So many of the situations in DEATH VALLEY are ripe for comedic potential, but there’s a lack of consistency and flow from scene to scene. Some stuff is obviously scripted and other stuff feels wildly off-the-chart improvised (as with the opening scene where Pierce’s one-night stand harasses him during a zombie attack). The one thing missing though is a naturalism to making some of the comedy work. It feels too staged – instead of feeling matter-of-fact which is how this comedy works the most.

Last week, the tag included a werewolf getting pulled over for mid-transformation. Again, that’s the ideal tone for this show. it was funny, smart and concise – but it stayed within the boundaries of this quasi-reality (albeit one filled with monsters).

Again, I’m still not sure what to make of DEATH VALLEY. I kind of want to like it, but I also kind of hate it because it squanders such an interesting cast and promising potential.

It also has some amazing gore gags. The zombie action and attacks in the park is actually better than some of the stuff that’s executed on THE WALKING DEAD – which strangely, no doubt has a larger budget than this.

So week 2, I’m still on the fence about DEATH VALLEY and its prospects for sustaining its  premise. There’s just only so many gags you can make out of zombies chomping on people and hooker vamps that the well may run dry before they start figuring out what show it actually wants to be.