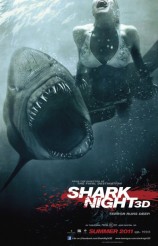 Sharks, college kids, a lake, crazy backwoods people, a good cast and a plot that boldly hinges on an impossible twist all add up to a satisfying and somewhat absurd B horror movie

First, a word about the title of SHARK NIGHT 3D. The movie is not necessarily in 3D. It is showing at a number of locations in the less pricey regular format. There are a few shots (mostly of bits of timber and objects flying through the air post-explosion) where it’s plain to see they’re designed for 3D, but on the whole, it seems like viewers who opt for the conventional format aren’t missing much and indeed may be gaining a lot of visibility, as 3D saps light from the image and a lot of the film takes place underwater, and therefore needs more, not less, illumination.

This aside, SHARK NIGHT runs through a checklist of what makes a satisfying end of summer horror movie. First of all, it has sharks, plural, not just one kind of shark, but a Great White, a hammerhead, even some weird little ones that haven’t gotten much publicity until now but are used to striking effect, and a whole bunch of others.

Sharks of course necessitate large bodies of water, which most people who can’t actually get into one at present enjoy viewing at this point in the season. Just looking at that lake helps us cool down subconsciously. (Yes, lake, not ocean. More about that in a moment.)

The film also has a strong cast, headed up by Sara Paxton (who ironically played a mermaid in AQUAMARINE a few years back), Joel David Moore (BONES) and even the ever-awesome Donal Logue. It also has the kind of “Say what?!” plot that allows us to not take the horror seriously at the same time we can go with a story too preposterous for normal narrative. As a special added bonus, for those who stay through the end credits – and why not, there’s a lot of cool (if red-hued) shark footage playing underneath them – actor Dustin Milligan has written a delightfully goofy pro-shark rap musical number, which he and nearly all of his cast mates enthusiastically perform.

There are now going to be some spoilers, because it’s hard to imagine that knowing this going in will harm one’s experience of watching SHARK NIGHT. If anything, this imaginary conversation may help in viewing the film, instead of having one’s brain arrest at a couple of junctures.

Without knowing the production’s history, it’s hard to say what happened here, but SHARK NIGHT looks as though someone said, “Great news! We’ve acquired all of this great footage of a whole bunch of different kinds of sharks! Oh, and we’ve got this really great location on a Louisiana lake!”

Then someone else pointed out, “Er, salt water sharks aren’t usually found in lakes.”

“No problem, we’ll make it a salt water lake!”

“No, no, doesn’t allow for the human factor. Wait, I’ve got it – our villains are putting all these sharks in the lake so they can make shark attack snuff movies that they can sell, because they’re backwoods people who need to make extra money!”

“Er, doesn’t the kind of equipment and manpower anybody would need to catch even one Great White and transport it alive anywhere, especially over land, cost a boatload of money?”

“Oh, come on, nobody’s going to think about that …”

Anyway, a group of students at New Orleans’ Tulane University decide to celebrate end of term by taking a vacation at the gorgeous bayou island home of one of their number, psych student Sara (Paxton). Sara hasn’t been home since she started school, and we gradually find out this hasn’t just been because she’s been busy with homework. Her history, which until now has had nothing to do with sharks, plays into what happens next. It is exactly the sort of scenario that makes one appreciate the upcoming TUCKER AND DALE VS. EVIL all the more.

Writers Will Hayes and Jesse Studenberg are to be commended for adding human bad guys, both because they’re easier to hate than a bunch of different fish (even ones with really big teeth) and because they solve the problem of how to get characters into the water once it’s realized there are sharks about. Then again, some of the characters make Darwin Awards-worthy decisions. The writing in the character introduction part of the film is perfectly decent.  SHARK NIGHT could have just as easily gone down the path of college kids comedy, as its players are better-drawn here than they are in a number of movies that ostensibly are more about character.

Director David R. Ellis does a good job with timing and cuts together what looks like footage of real sharks with his actors in a way that makes us take notice without having too many shots where what we may assume is an animatronic shark is in frame with a performer. The animatronics are likewise for the most part very good.

As for bloodshed, SHARK NIGHT 3D is rated PG-13, which means we don’t see too much mortal physical suffering or its aftermath, though efforts are made to deal with a severed arm (whose owner musters a surprising amount of energy after the loss).

So that’s the ASSIGNMENT X take on SHARK NIGHT 3D – the good, the bad and the gonzo.