The series gets better as it finds a better balance between the comedy, drama and gore (yes, there's drama) 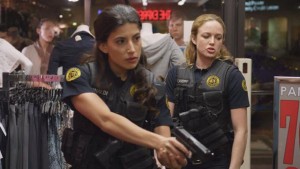 I think DEATH VALLEY has finally found itself. It’s taken a couple of weeks, but “Zombie Fights” is a step in the right direction.

It’s still not laugh out loud funny, but the mixture of funny, serious and super-sized gore is starting to gel. It’s also revealing that this first season has more of a mythological arc that previously expected. Things have standalone elements, but many recurring plot strands are obviously hinting at bigger things at work.

“Zombie Fights” has three different stories going on, but the primary one involves Officer John-John (Texas Battle) and Captain Dashell (Bryan Callen) who become obsessed with watching “zombie fights” on the internet (essentially the horror  version of hobo fights). When John-John discovers his dad (now undead) is one of the on-going champions, he decides to crash a taping to right a wrong.

Meanwhile, Officer Landry and Rinaldi (Caity Lotz, Tania Raymonde) are paired up for the first time as they explore their differences in police work (and their feelings towards  the opposite sex).

And finally Officers Stubeck and Pierce (Charlie Sanders, Bruce Johnson) realize they both appreciate one another as they follow a Bloodmobile whose workers are stealing blood, not delivering it. The end of the episode is particularly disturbing when we see Stubeck brutally assaulted by a couple of vamps.

Strangely, the uneven tone of DEATH VALLEY’s first few episodes has finally grown on me. The actual humanity and tragedy of John-John discovering his father is zombie is actually played perfectly and as tragic as the end is, it shows that DEATH VALLEY is striving to be more than just a series of silly jokes and one-liners.

The actors are also finding the voice of their characters too. This is the first time Battle has impressed as John-John, while Callen continues to refine the silly non-sequiturs her character continually spouts off. Even Lotz and Raymode prove they have a good rapport with one another – once again showcasing what a bad-ass her Landry is and how layered Rinaldi is becoming with her own insecurities.

DEATH VALLEY still isn’t perfect – and I think at a certain point they’re going to have to lose the idea of a camera crew filming the Undead Task Force (UTF)  (most of the show is shot like a movie anyway), but these are small quibbles.

The show isn’t perfect and it continues to evolve, but it’s at a much better place when it started, which promises that it might just end up somewhere by season’s end that will warrant a second season.