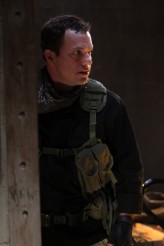 What is a Greta? The reveal is finally here in a wonderfully twisted episode

Even though CHUCK has been primarily focused on the search for Chuck’s mom (which he found) and villainous Volkoff (Timothy Dalton), Season 4 also set up a rather strange series of guest spots this year with various CIA agents working at the Buy More named Greta. Summer Glau, Stacy Kiebler and Isaiah Mustafa have all played Greta at some point. And with “The A-Team,” that mystery is finally paid off – and it ties into the secret side mission Casey (Adam Baldwin) has been working on.

Essentially, Casey has a new team consisting of two previous Greta’s (Kiebler and Mustafa). Both have been programmed with the Intersect and don’t have the emotional issues Chuck (Zachary Levi) has – thereby making Chuck obsolete (well, sort of).

As Chuck and Sarah (Yvonne Strahovski) begin questioning whether they’re the “A-team” or the “B-team” in this operation, both teams soon intersect (sorry, bad pun) where they have to work together and prove who truly is the top of the class.

“Vs. The A-Team” is a wildly fun episode. It digs deep into a previously set up plot point on the show and pays it off famously. We’ve been wondering what the Greta thing was all about, and this episode rewards it in a very satisfying way (though I wish the NBC promos didn’t give away this twist ahead of time).

The episode also brings the Intersect computer that her dad built back into the hands of Ellie (Sarah Lancaster) who needs something to do now that she’s a stay-at-home mom. The reason why she gets the computer though, has to do with the CIA who hopes she can figure out (inadvertently) how to make the Intersect “perfect.”

My bet is that at some point she’s going to have the Intersect in her head – now that would be cool. Bartowski vs. Bartowski!

There’s also some great comedy between Lester (Vik Sahay) and Jeff (Scott Krinsky) as Lester believes Jeff is clairvoyant. The pay-off to this gag is classic CHUCK.

Overall, “Vs. the A-Team” is excellent CHUCK fun and even starts to showcase a softer side to Casey. I’m sure this isn’t the last of the Gretas, so there’s a good chance we might be seeing Kiebler, Mustafa and heck, maybe even Glau once again down the road.