Bret Harrison has been a star in need of an excellent vehicle for his everyman charms and comedic timing.

While he was great in the two-season REAPER cult series, it didn’t propel him the way it should have. Throw in a strange stint on the second season of V 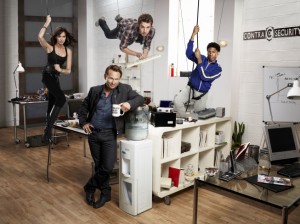 that was trying to make him the comic relief in a show that was in more need of action, drama and actual sci-fi than comedy, and, well, it’s clear it’s been a rough patch for the promising actor.

Thankfully BREAKING IN is here, which casts Harrison as Cameron, an excellent hacker who has managed to secure himself a scholarship at college, preferred parking and many other perks of knowing your way around a computer.

This kind of skill comes in handy when he’s scouted by security firm Contra Security headed by the enigmatic Oz (Christian Slater). Oz blackmails Cameron to come work for him (he’ll blow the whistle on his illegal hacking activities if he doesn’t). Cameron reluctantly agrees.

The main goal is Contra Security is to crack other company’s security systems to show their vulnerabilities and Cameron’s first task is to steal a car to prove his worth.

The thievery doesn’t go as planned (he steals from the wrong dealership), but he makes his wrong a right, and it’s clear he’s going to slowly become the latest part of this quirky office comedy featuring the pretty safecracker Melanie (Odette Annable) who he has a crush on (no surprise), Cash (Alphonso McAuley) a geeky walking/talking encyclopedia of pop cultural knowledge and of course Oz, whose madness is part of his method.

The pilot for BREAKING IN has a few funny laughs and is fastly paced courtesy of helmer Seth Gordon. While there are many strange strands that pepper the episode, it’s not an out-of-the-park winner … just yet.

That said, it’s clear there is an exceptional cast here and a funny premise that once it gets going has the potential to be pretty darn good – if not for the anchoring from Harrison (who is perfect in the lead) and Slater (who will continue to be great if they continue to make him stranger and more mysterious as the series moves forward).

There is an alarmingly suspect similarity to TNT’s LEVERAGE – both in character archetypes (the hot thief, the former 1980s icon as leader, the pop cultural spewing comic relief) and the loose plot structure (though the Leverage the team steals for the helpless, the Contra team steals to show they can steal from willing participants).

The prospects for BREAKING IN are endless and it’s off to a good start. Fox may have a good fit with AMERICAN IDOL and their comedy development has been the strongest it’s been in years. Can’t wait to see if BREAKING IN continues to live up to its enormous potential.